Can the Endangered Species Act Keep the Polar Bear (Ursus maritimus) Out of Hot Water? 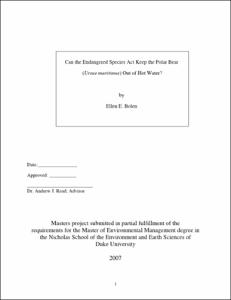 View / Download
1.6 Mb
Date
Author
Bolen, Ellen E.
Advisor
Read, Andrew J.
Repository Usage Stats
320
views
487
downloads
Abstract
On December 27, 2006 the Fish and Wildlife Service (FWS) announced their support for listing the polar bear (Ursus maritimus) as a threatened species under the Endangered Species Act (ESA). The polar bear met two of the five listing criteria: (1) decline of the population throughout all or part of its range; and (2) lack of adequate regulatory mechanisms. The notice identified global climate change as the primary cause for population decline. FWS concluded that current laws are adequate to protect the polar bear from short-term direct impacts, but the listing under the ESA is needed to address impacts from climate change; a long-term, indirect threat. The polar bear is the first proposed listing with such diffuse and poorly defined harms. Given the nature of this threat, can the ESA protect the polar bear from global climate change? To answer this question I examined case studies of other species listed, past implementation of the ESA, and the establishment of proximate causation. I also reviewed how Section seven of the ESA might be implemented to address global climate change. The ESA is successful when ‘takers’ can be readily identified, and when the harms are easily managed. ‘Takes’ due to global warming are difficult to identify due to the number of emitters and differentiating between natural and anthropogenic sources. Additionally, it will be difficult to establish the proximate causation needed to assess harms. I conclude that it is unlikely that the listing alone will be able to save the polar bear.
Type
Master's project
Department
Nicholas School of the Environment and Earth Sciences
Subject
Fish and Wildlife Service (FWS)
Polar bear (Ursus maritimus)
Threatened species
Permalink
https://hdl.handle.net/10161/300
Citation
Bolen, Ellen E. (2007). Can the Endangered Species Act Keep the Polar Bear (Ursus maritimus) Out of Hot Water?. Master's project, Duke University. Retrieved from https://hdl.handle.net/10161/300.
Collections
More Info
Show full item record