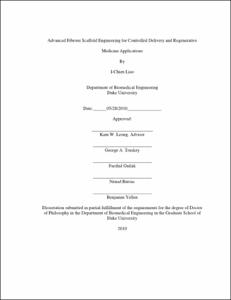 Continuous nanostructures, such as electrospun nanofibers, embedded with proteins may synergistically present the topographical and biochemical signals to cells for tissue engineering applications. In this dissertation, co-axial electrospinning is introduced as a mean to efficiently encapsulate and release protein and live entities while producing a tissue engineering scaffold with uniaxial topography. In the first specific aim, aligned poly (caprolactone) nanofibers encapsulated with BSA and growth factors were produced to demonstrate controlled release and bioactivity retention properties. Control over release kinetics is achieved by incorporation of poly(ethylene glycol) as a porogen in the shell of the fibers. PEG leaches out in a concentration and molecular weight dependent fashion, leading to BSA release half-lives that range from 1 -20 days. The second specific aim introduces the fabrication of virus and bacterial cell encapsulated electrospun fibers to achieve unique biological functionalization. Adenovirus encoding the gene for green fluorescent protein was efficiently encapsulated into the core of poly(caprolactone) fibers through co-axial electrospinning and subsequently released via the porogen-mediated process. Encapsulated bacterial cells were confined to fibers of varying core sizes, which provided an aqueous core environment for free mobility and allowed the bacterias to proliferate within the fibers.

In the third specific aim, the differentiation of skeletal myoblasts on aligned electrospun polyurethane fibers and in the presence of electromechanical stimulation were systematically studied. Skeletal myoblasts cultured on aligned polyurethane (PU) fibers showed more pronounced elongation, better alignment, upregulation of contractile proteins and higher percentage of striated myotubes compared to those cultured on random PU fibers and film. In the last specific aim, the controlled release aspect of co-axial electrospun fibers were combined with skeletal tissue engineering to serve as a therapeutic implant for the treatment of hemophilia. A non-viral, tissue engineering approach were taken to stimulate local lymphatic or vascular system in order to enhance transport near the FVIII-producing implants to provide effective and sustained treatment for hemophilia A. Stable FVIII-producing clones were engineered from isolated myoblasts and cultured on aligned, protein-releasing electrospun fibers to form skeletal myotubes. The implanted construct rapidly integrated with host tissue and selectively induced angiogenesis or lymphangiogenesis as a result of the encapsulated growth factors. Constructs inducing angiogenesis significantly enhanced the transport of produced FVIII and achieved hemophilia phenotypic correction over two months. The use of co-axial electrospun fibers to serve as controlled delivery and tissue engineering construct furthers the continued pursue of a more sophisticated and medically relevant implant scaffold design.