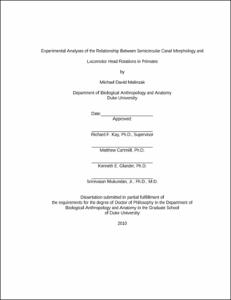 Reconstructing locomotor patterns from fossils is crucial for understanding the origins of primates and important transitions in various primate clades. Recent studies suggest that the semicircular canals of the inner ear provide evidence about locomotion. The canals sense rotational head accelerations and drive reflexes essential for normal movement. Because bony aspects of canal morphology influence canal sensitivity, this system can be studied in osteologic specimens and fossils. Variation in canal morphology in living and, by inference, extinct primates has been attributed to interspecific differences in locomotor behavior. However, the manner in which movement selects for canal morphology is debated, alternative scenarios are plausible, and no relevant measurements are available documenting head movements in primates.

To refine proposed links between canal morphology and locomotor function, and to resolve conflicting functional interpretations, this study examines head rotations in lemurs and lorises exhibiting diverse locomotor behaviors. Three-dimensional kinematic analyses were used to characterize angular velocities of the head during locomotion. These data are used to test hypotheses concerning intraspecific, interspecific, and body-size dependent variation in head rotations. Cranial CT scans are used to model canal sensitivity to rotations in different directions. Observed patterns of head rotation are compared to predicted patterns of sensitivity to test hypotheses about the relationship between locomotor behavior and canal design.

Evaluation of existing locomotor inferences reveals that brain size exerts a significant effect on canal size and that the prevailing equations for predicting agility from body and canal size are highly inaccurate. Intraspecific comparisons between maps of observed angular velocity and predicted sensitivity allow identification of map types associated with different general locomotor modes and do not support existing hypotheses about the primary selective forces acting on canal morphology. The new data are used to formulate and test a novel "fast-accurate hypothesis" to explain why all vertebrates are more sensitive to rotations about some axes than others. The fast-accurate hypothesis stipulates that angular velocities presented about axes of mean sensitivity are most accurately interpreted by the brain, and that selection aligns axes of mean sensitivity with axes of habitually fast rotation because accurate perception of rapid rotations confers survival benefit. The fast-accurate hypothesis was used to predict which features of the canals should be correlated with high mean angular velocities of head movement. Novel equations that predict behavior from these newly identified canal morphologies were generated and found to outperform existing equations when tested on the original sample of 11 strepsirrhine species.