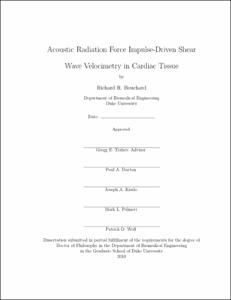 Acoustic radiation force impulses (ARFI) have been used to generated transverse-traveling mechanical waves in various biological tissues. The velocity of these waves is related to a medium's stiffness and thus can offer useful diagnostic information. Consequently, shear wave velocimetry has the potential to investigate cardiac disease states that manifest themselves as changes in tissue stiffness (e.g., ischemia).

The work contained herein focuses on employing ARFI-based shear wave velocimetry techniques, similar to those previously utilized on other organs (e.g., breast, liver), for the investigation of cardiac tissue. To this end, ARFI excitations were used to generate slow-moving (under 3 m/s) mechanical waves in exposed myocardium (with access granted through a thoracotomy); these waves were then tracked with ultrasonic methods. Imaging techniques to increase frame-rate, decrease transducer/tissue heating, and reduce the effects of physiological motion were developed. These techniques, along with two shear wave velocimetry methods (i.e., the Lateral Time-to-Peak and Radon sum transformation algorithms), were utilized to successfully track shear wave propagation through the mid-myocardial layer <italic>in vitro</italic> and <italic>in vivo</italic>. <italic>In vitro</italic> experiments focused on the investigation of a shear wave anisotropy through the myocardium. This experimentation suggests a moderate shear wave velocity anisotropy through regions of the mid-myocardial layer. <italic>In vivo</italic> experiments focused on shear wave anisotropy (which tend to corroborate the aforementioned <italic>in vitro</italic> results), temporal/spatial stability of shear wave velocity estimates, and estimation of wave velocity through the cardiac cycle. Shear wave velocity was found to cyclically vary through the cardiac cycle, with the largest estimates occurring during systole and the smallest occurring during diastole. This result suggests a cyclic stiffness variation of the myocardium through the cardiac cycle. A novel, on-axis technique, the displacement ratio rate (DRR) method, was developed and compared to conventional shear wave velocitmetry and ARFI imaging results; all three techniques suggest a similar cyclic stiffness variation.

Shear wave velocimetry shows promise in future investigations of myocardial elasticity. The DRR method may offer a means for transthoracic characterization of myocardial stiffness. Additionally, the future use of transesophageal and catheter-based transducers presents a way of generating and tracking shear waves in a clinical setting (i.e., when epicardial imaging is not feasible). Lastly, it is hoped that continued investigations into the physical basis of these ARFI-generated mechanical waves may further clarify the relationship between their velocity in myocardium and material stiffness.