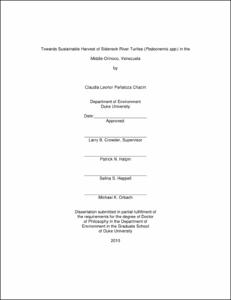 Despite 21 years of protection, sideneck river-turtles (<italic>Podocnemis expansa</italic>, <italic>P. unifilis</italic> and <italic>P. vogli</italic>, arrau, terecay and galápago, respectively), an important food resource for riverine communities (<italic>ribereños</italic>) in the Middle Orinoco, have not recovered. To determine the most effective conservation alternative for recovery, we conducted semi-structured interviews of ribereños and determined their attitudes towards turtle conservation; we collected discarded turtle remains in riverine communities to estimate the level of turtle harvest; and constructed a population model to study the effect of reduced survival and future extraction on arrau turtle population growth. We found that ribereños blame continued commercial extraction for the lack of turtle population recovery. Ribereños have a desire to participate actively in conservation and, despite feeling alienated by governmental officials charged with protecting turtles, prefer to be included in conservation efforts. However, ribereños also fear retaliation from turtle poachers. We found widespread turtle harvest along the Middle Orinoco centered on juvenile arrau turtles, and adult female terecay and galápago turtles. In our population model, reducing harvest causes an increase in population growth. A 10% increase in survival causes rapid exponential growth in arrau turtles. The population continues to grow in over 70% of projected scenarios with limited harvest from a recovered stock. Due to the widespread distribution of turtles and their harvest, we recommend increasing ribereño participation in conservation activities, closing outsider (non-ribereño) access to the resource, increasing enforcement against illegal commercial harvest, instating possession limits for subsistence harvest, and promoting localized captive breeding of faster maturing terecay and galápago turtles to satisfy desire for turtle consumption.