Function of Phosphatidylinositol 3-Kinase Class III in the Nervous System 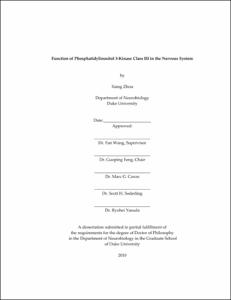 We generated a conditional allele of Pik3c3 and first deleted it specifically in the peripheral sensory neurons. Mutant large-diameter myelinated sensory neurons accumulated numerous enlarged vacuoles and ubiquitin-positive aggregates and underwent rapid degeneration. By contrast, Pik3c3-deficient small-diameter unmyelinated neurons accumulated excessive numbers of lysosome-like organelles and degenerated slower than large-diameter neurons. These differential degenerative phenotypes are unlikely caused by a disruption of the autophagy pathway, because inhibiting autophagy alone by conditional deletion of Atg7 results in a completely distinct subcellular phenotypes and very slow degenerations of all sensory neurons. More surprisingly, a noncanonical PIK3C3-independent LC3-positive autophagosome formation pathway was activated in Pik3c3-deficient small-diameter neurons. This work uncovered unexpected differences of the endo-lysosomal systems in different types of neurons and discovered a novel autophagy initiation pathway in vivo in neurons.

These studies represent the first in vivo characterization of PIK3C3 functions in mammals, and provide insight into the complexity and functional importance of neuronal endo-lysosomal and autophagic pathways.