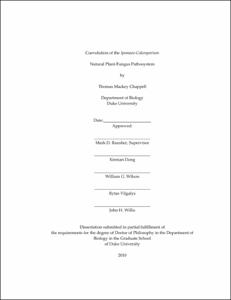 <p>Plants and their pathogens coevolve, with pathogen infection and host resistance acting in evolutionary antagonism of each other. Plant-pathogen coevolution has been shown to effect genetic divergence between populations and species, resulting in localized or specialized interactions between hosts and pathogens. Because most of the studies to date investigating plant-pathogen coevolution have been carried out in managed systems and have focused on pairwise interactions, we know little about three aspects of plant pathosystems in natural settings: 1) the role in nature of the gene-for-gene paradigm for genetic determination of resistance; 2) the relationship of host community diversity and structure, and host-pathogen interaction structure, to the coevolutionary process; and 3) the factors which underlie and drive local adaptation and specialization of interactions.

<p>This dissertation constitutes the results of research in which I have begun addressing these aspects in a natural plant-fungus pathosystem comprising three Ipomoea host species and a single rust pathogen, Coleosporium ipomoeae. I have expanded previous characterization of the genetics of plant resistance in one constituent host species in the system by genetic crosses to characterize the basis of resistance in two additional species, finding support for the expectation that the gene-for-gene paradigm of interaction is important in natural systems. I conducted a cross-inoculation experiment designed to assess host and pathogen variation in infectivity and resistance, to investigate patterns of community interaction structure, and the role that antagonistic coevolution may play in structuring the communities which compose pathosystems. In these experiments I found that the coevolutionary interaction in this system leads to genetic divergence and the substantial amount of host and pathogen variation I discovered, but that it tends to preserve one pattern of community interaction structure across communities. I expanded my cross-inoculation experimental design to facilitate analysis of quantitative aspects of pathogenesis by measuring the intensity of infections, to test existing hypotheses concerning local adaptation and specialization in pathosystems. In this analysis I found strong host local adaptation and pathogen local maladaptation for the qualitative interaction trait of infectivity, and I found weak host local maladaptation and pathogen local adaptation for the quantitative interaction trait of aggressiveness. I also found host specialization among pathogens, and specialized resistance among hosts, to be common in this system. In light of these results, I hypothesize that the geographic scale of host-pathogen coevolution in this system is that of the local community, and that differences between host species result in persistent but incomplete host specialization in pathogen races.