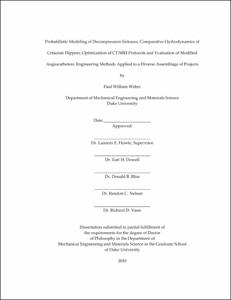 The intent of the work discussed in this dissertation is to apply the engineering methods of theory/modeling, numerics/computation, and experimentation to a diverse assemblage of projects. Several projects are discussed: probabilistic modeling of decompression sickness, comparative hydrodynamics of cetacean flippers, optimization of CT/MRI protocols, evaluation of modified catheters, rudder cavitation, and modeling of mass transfer in amphibian cone outer segments.

The first project discussed is the probabilistic modeling of decompression sickness (DCS). This project involved developing a system for evaluating the success of decompression models in predicting DCS probability from empirical data. Model parameters were estimated using maximum likelihood techniques, and exact integrals of risk functions and tissue kinetics transition times were derived. Agreement with previously published results was excellent including maximum likelihood values within one log-likelihood unit of previous results and improvements by re-optimization, mean predicted DCS incidents within 1.4% of observed DCS, and time of DCS occurrence prediction. Alternative optimization and homogeneous parallel processing techniques yielded faster model optimization times. The next portion of this project involved investigating the nature and utility of marginal decompression sickness (DCS) events in fitting probabilistic decompression models to experimental dive trial data. Three null models were developed and compared to a known decompression model that was optimized on dive trial data containing only marginal DCS and no-DCS events. It was found that although marginal DCS events are related to exposure to decompression, empirical dive data containing marginal and full DCS outcomes are not combinable under a single DCS model; therefore, marginal DCS should be counted as no-DCS events when optimizing probabilistic DCS models with binomial likelihood functions. The final portion of this project involved the exploration of a multinomial DCS model. Two separate models based on the exponential-exponential/linear-exponential framework were developed: a trinomial model, which is able to predict the probabilities of mild, serious and no-DCS simultaneously, and a tetranomial model, which is able to predict the probabilities of mild, serious, marginal and no-DCS simultaneously. The trinomial DCS model was found to be qualitatively better than the tetranomial model, for reasons found earlier concerning the utility of marginal DCS events in DCS modeling.

The next project discussed is evaluation of modified angiocatheters. In this study, a standard peripheral end hole angiocatheter was compared to those modified with side holes or side slits by using experimental techniques to qualitatively compare the contrast material exit jets, and by using numeric techniques to provide flow visualization and quantitative comparisons. A Schlieren imaging system was used to visualize the angiocatheter exit jet fluid dynamics at two different flow rates, and a commercial computational fluid dynamics (CFD) package was used to calculate numeric results for various catheter orientations and vessel diameters. Experimental images showed that modifying standard peripheral intravenous angiocatheters with side holes or side slits qualitatively changed the overall flow field and caused the exiting jet to become less well-defined. Numeric calculations showed that the addition of side holes or slits resulted in a 9-30% reduction of the velocity of contrast material exiting the end hole of the angiocatheter. With the catheter tip directed obliquely to the wall, the maximum wall shear stress was always highest for the unmodified catheter and always lowest for the 4 side slit catheter. Modified angiocatheters may have the potential to reduce extravasation events in patients by reducing vessel wall shear stress.

In the final project discussed, modeling of mass transfer in amphibian cone outer segments, a detailed derivation of a simplified (continuum, one-dimensional) mathematical model for the radio-labeled opsin density profile in the amphibian cone outer segment is presented. This model relies on only one free parameter, which was the mass transfer coefficient between the plasmalemma and disc region. The descriptive equations were nondimensionalized, and scale analysis showed that advective effects could be neglected as a first approximation for early times so that a simplified system could be obtained. Through numeric computation the solution behavior was found to have three distinct stages. The first stage was marked by diffusion in the plasmalemma and no mass transfer in the disc region. The second stage first involved the plasmalemma reaching a metastable state whereas the disc region density increased, then involved both the plasmalemma and disc regions increasing in density with their distributions being qualitatively the same. The final stage involved a slow relaxation to the steady-state solution.