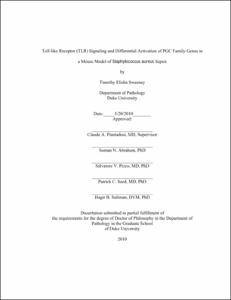 Sepsis is a major cause of morbidity and mortality in the United States, and Staphylococcus aureus (S. aureus) is the bacteria most commonly cultured from septic patients. In severe sepsis, the relationship between the systemic inflammatory response and the resulting mitochondrial and metabolic dysfunction is not fully understood, especially with respect to the mechanisms of mitochondrial damage resolution. The process of mitochondrial biogenesis, which leads to the restoration of metabolic and anti-oxidative functions in damaged or stressed cells and tissues, is pro-survival and is a critical protective response in sepsis. Mitochondrial biogenesis requires the coordinated expression of multiple regulatory proteins, including the PPARgamma-coactivator (PGC) family of proteins. Previous work in sepsis has focused on mitochondrial biogenesis in response to late signals of mitochondrial damage; however, for acute sepsis, we have hypothesized a direct and early link between the innate immune response and the transcriptional activation of mitochondrial biogenesis. Since the Toll-like receptors (TLRs) are a major part of the innate immune response, we hypothesized that they could activate mitochondrial biogenesis in bacterial sepsis. Earlier work showed that TLR4 (which responds to components of Gram-negative bacteria) was necessary for mitochondrial biogenesis induction in response to heat-killed E. coli challenge. For this work, the objective was to investigate whether signaling by TLR2 (which responds to components of Gram-positive bacteria) would activate mitochondrial biogenesis in response to S. aureus sepsis in mice. The sepsis model was initially characterized in wild-type (WT) mice by PCR analysis of hepatic RNA, in which the up-regulation of several regulatory proteins for mitochondrial biogenesis, including all three PGC family members, was observed. In contrast, in both TLR2-/- and TLR4-/- mice, the mitochondrial biogenesis response was deficient and delayed. In addition, PGC-1alpha and PGC-1beta were differentially regulated in WT, TLR2-/-, and TLR4-/- mice. To identify the mechanisms involved in this induction pattern, the known TLR signaling pathways were systematically probed for activation using several strains of genetic knockout mice. These data demonstrated that the differential regulation of the PGC family is independent of the MyD88 adapter protein and is caused in part by IRF7 signaling. IRF7 is a pro-inflammatory transcription factor that is normally involved in the interferon response; in this case, IRF7 was found to be necessary but not sufficient for PGC-1alpha/beta induction. In addition, a second level of regulation was identified in the microRNA mmu-mir-202-3p, which is inversely correlated with the expression of PGC-1alpha and PGC-1beta mRNA in WT, TLR2-/-, and TLR4-/- mice and was shown to functionally decrease PGC-1alpha mRNA. If these observations are confirmed in humans, IRF7 and mir-202-3p may be potential therapeutic targets for the up-regulation of PGC-1alpha/beta levels in the clinical setting of sepsis and impaired mitochondrial biogenesis.