The Function of LAT in T Cell Activation and Autoimmunity 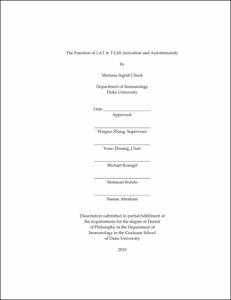 LAT (linker for activation of T cells) is an important transmembrane adaptor protein in TCR-mediated signaling. Upon TCR engagement, LAT associates with multiple proteins which allows for the activation of downstream signaling pathways. The interaction between LAT with phospholipase C (PLC-gamma1) is especially critical for T cell receptor (TCR)-mediated Ca2+ signaling and MAPK activation. Knock-in mice harboring a mutation at the PLC-gamma1 binding site (Y136) of LAT develop a severe lymphoproliferative syndrome. These mice have defective thymic development and selection and lack natural regulatory T cells, implicating a breakdown of both central and peripheral tolerance. The phenotype observed in LAT-/- mice is even more severe.T cells are absent in the periphery of these mice due to a complete block in thymocyte development at the DN3 stage thereby making it difficult to study the physiological role of LAT in the activation and function of mature T cells. In order to bypass the developmental defects exhibited by LAT-/- and LATY136F mice, we developed conditional knock-in lines in which only a nonfunctional (ERCreLATf/-) or a LATY136F-mutated allele (ERCreLATf/m) of LAT is expressed in mature T cells after deletion of the wildtype LAT allele.

Analysis of ERCreLATf/m T cells after LAT deletion indicated that the interaction between LAT and PLC-gamma1 plays an important role in TCR-mediated signaling, proliferation, and IL-2 production. Furthermore, the deletion of LAT induced the development of the LATY136F lymphoproliferative syndrome in these mice. Although Foxp3+ natural Treg cells were present in these mice after deletion, they were unable to suppress the proliferation of conventional T cells. Our data indicated that the binding of LAT to PLC-gamma1 is essential for the suppressive function of CD4+CD25+ regulatory T cells.

We have also performed studies using ERCreLATf/- T cells to demonstrate that total LAT deficiency reduced the expression of Foxp3, CTLA4, and CD25 in peripheral Treg cells. Interestingly, mice with LAT deleted in peripheral T cells developed a lymphoproliferative syndrome similar to that observed in LATY136F mice although the disease caused by the LATY136F mutation was more severe. These data implicate LAT in both the positive and the negative regulation of mature T cells. Moreover, our findings indicate that LAT is essential in the maintenance of the regulatory T cell profile in the periphery, thereby aiding in the prevention of lymphoproliferative autoimmune disease.