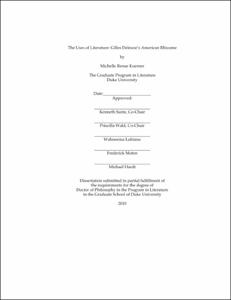 "The Uses of Literature: Gilles Deleuze's American Rhizome" puts four writers - Walt Whitman, Herman Melville, George Jackson and William S. Burroughs - in conjunction with four concepts - becoming-democratic, belief in the world, the line of flight, and finally, control societies. The aim of this study is to elaborate and expand on Gilles Deleuze's extensive use of American literature and to examine possible conjunctions of his philosophy with contemporary American literary criticism and American Studies. I argue that Deleuze's interest in American writing not only productively complicates recent historical accounts of "French Theory's" incursion into American academia, but also provides a compelling way think about the relationship between literature and history, language and experience, and the categories of minor and major that organize national literary traditions. Beginning with the concept of the "American rhizome" this dissertation approaches the question of rhizomatic thought as a constructivist methodology for engaging the relationship between literary texts and broader social movements. Following an introduction laying out the basic coordinates of such an approach, and their historical relevance with respect to the reception of "French Theory" in the United States, the subsequent chapters each take an experimental approach with respect to a single American writer invoked in Deleuze's work and a concept that resonantes with the literary text under consideration. In foregrounding the question of the use of literature this dissertation explores the ways literature has been appropriated, set to work, or dismissed in various historical and institutional arrangements, but also seeks to suggest the possibility of creating conditions in which literature can be said to take on a life of its own.