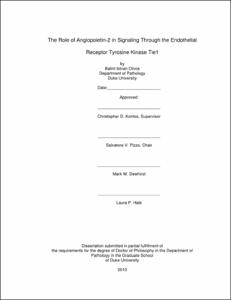 A functioning vasculature is critical for the supply of nutrients to other systems as well as a host of physiologic and pathologic processes. Vascular development and maintenance are tightly regulated by a number of signaling processes, among which the Tie proteins are two functioning receptors. Although they have been shown to exhibit essential roles in endothelial cell sprouting and quiescence, the mechanistic details of Tie interactions and the effects of their associations with the Angiopoietins have not been elucidated. Studies in this thesis investigated the effects of Ang2 on Tie1 activation, signaling, and cellular responses within the context of both native and immortalized endothelial cells. Additionally, we investigated the role of Ang2 in the cellular reorganization and subsequent downregulation of Tie1. We observed that Ang2, but not Ang1, induces phosphorylation of Tie1 in endothelial cells and that the extracellular domain of Tie2 is required for Ang2-mediated activation of Tie1. Furthermore, we demonstrated that Tie1 activation leads to signaling through the Akt axis, and the consequent stimulation of anti-apoptotic and pro-proliferative cellular effects. Additionally, we demonstrated that Ang2 induces a concentration and time dependent downregulation of Tie1, and that Tie2's role in the process appears to be recruitment of the ligand to the multimeric Tie complexes. Interestingly, although Ang2 stimulation is necessary, we demonstrated that Ang2 activation of Tie1 receptor complexes is not required for ligand induced downregulation of the receptor. Finally, we characterized the modulatory role of Tie1 with regards to Angiopoietin signaling through Tie2, and observed that removal of Tie1 from the surface of endothelial cells induces Ang2 activation of Tie2 leading to increases in cell survival signaling cascades. Taken together, these data shed new light on Angiopoietin signaling through the Tie receptors, further characterize the interactions between Tie1 and Tie2, suggest novel forms of endothelial cell regulation within developing and mature vasculature, and may have implications in signaling within a host of physiologic and pathologic states.