The psychology of legitimacy: Implications for organizational leadership and change 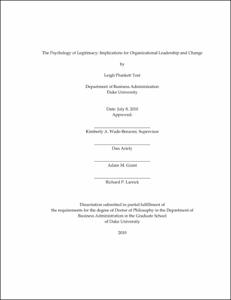 Three distinct chapters explore the individual-level dynamics of legitimacy judgments and support for leaders and their initiatives. Chapter 1 develops a theoretical framework for understanding the content of legitimacy judgments and the process by which those judgments develop and change over time. Chapter 2 explores the role of group orientation in moderating the impact of instrumental, relational, and moral concerns in determining support for leaders. Chapter 3 explores the role of power in moderating leaders' assumptions about the types of behaviors that will elicit support for followers.

Chapter 4 describes a final study that integrates the findings from Chapters 2 and 3. Specifically, Chapter 4 demonstrates that there is a positive effect of leader power on support for the leader among low, but not high, identifying groups. The findings further indicate that this effect is mediated by followers' perceptions of the leader's instrumental behaviors. Implications, limitations, and future directions of the research are discussed.