Causes and Impacts of Institutional and Structural Variation: Globalization in the Tobacco and Pork Industries 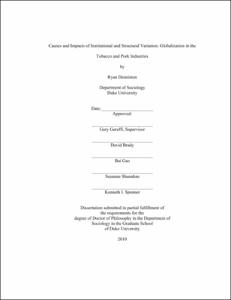 Among the most significant changes to the agricultural sector in the twentieth century include a sharp decline in employment and the numbers of farms, a decline in the proportion of total value that accrues to agricultural producers, and an increase in farm level and regional specialization. Within the U.S., substantial differences in the characteristics of agricultural producers and the spatial distribution of production persist amid industry change. These changes coincided with changes in global markets, domestic consumption, consolidation and concentration within the processing and retailing sectors, and government policy. The causality that lies behind these developments is the key puzzle that this study addresses.

This study advances an institutional explanation of industry formation across locations within the U.S. Differences in industry constitution at the local level produce different impacts of and responses to global markets, reflected by economic changes and policy developments, as actors work to secure stability and advantage in markets (Fligstein 2001). This study uses the global value chains' definition of the industry, which incorporates the network of actors arrayed along a process of production, to capture the set of actors with the capacity to affect industry operation (Gereffi 1994). An assessment of the relative importance of local economic characteristics, global markets, organization and coordination within industries, and government policies to where production locates in the primary objective of the study.

The pork and non-cigar tobacco industries across several states within the United States from 1959 through 2005 allow for a contrast along the key changes identified above. Within case comparison is used to construct causal narratives of industry change at the state level. Panel and pooled time series analysis assess the relative importance the factors to agricultural change.

Local economic characteristics largely fade from significance with the inclusion of the theoretical perspectives. Total and net trade in agricultural and manufactured products is generally significant across industries for production, although this is not the case for specific tobacco types. The proportion of farms composed of small farms is significant for production and for farm structure in both industries. The presence of manufacture is significant for hog production and could not be assessed for tobacco. While federal policies are broadly significant for the tobacco industry, identified state policies exhibit few consistent effects for hog production. Importantly, farm structure measures were only available for Census years, which reduces sample size. Second, many of the measures are industry-specific, which reduces comparability.