"It Means Something These Days to be a Marine": Image, Identity, and Mission in the Marine Corps, 1861-1918 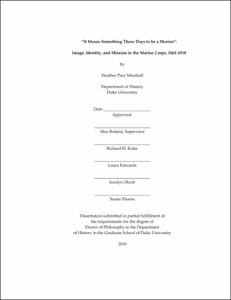 Throughout much of the nineteenth century, the Marine Corps plodded along, a small military institution little known to the public. Moreover, the institution faced a host of problems ranging from recruiting difficulties and desertion to resisting absorption by the Army, or even elimination altogether. It also had to deal with a negative public image as promulgated by some naval officers and the press since the beginning of the nineteenth century. Marine officers were depicted as lazy and superfluous aboard ship, while enlisted Marines were portrayed as gullible fools who did not participate fully in running and maintaining the ship. By the end of World War I, however, the institution had transformed itself into a well-respected entity. Many Marines even viewed themselves as superior to sailors. Whatever problems the Corps would face throughout the twentieth century, public ignorance would not be one of them. The institution successfully had articulated an image of itself as an elite military institution of fighters.

Existing historiography on the Marine Corps tends to emphasize the institution's existential and finally successful quest for a mission. In contrast, Marines represented themselves as multidextrous, capable of all missions and responsibilities. They could not lay claim convincingly to a single mission because of their odd position between the land-based missions of the Army and the sea-based missions of the Navy. In response, the Corps promoted the notion of Marines as elite troops, suggesting it could fill any role and do it more effectively than other military branches. The institution created a flexible image that could be deployed in various forms to the public while simultaneously strengthening the institution's group identity.

This self-image required years of construction. Some aspects of this new representation grew out of the Corps' past experiences, but others had to be invented out of whole cloth. Individual officers composed a canonical history for the Corps and stressed traditions as the foundation of the Corps' corporate identity. By 1910 these foundation myths coalesced into coherent narrative. The Corps stressed it was an elite institution composed of picked men who prided themselves, albeit incorrectly, on being the nation's oldest military service and the best fighters. The Corps' Recruiting Publicity Bureau, established in 1911, adeptly fostered and even exaggerated this image. The Marine was a larger than life he-man, capable of anything and daunted by nothing.

This image was integral to the Corps' preparation for World War I. By the time the United States declared war against Germany in 1917, the Corps had positioned itself to obtain the types of recruits it wanted, train them, and assure their presence overseas in a land war that was atypical of the Corps' previous experience. The Bureau simultaneously sought to ensure the recruits it had attracted with an image would embrace the institution's identity. To this end the Bureau worked to instill the Corps' group identity into recruits during training and to reinforce this identity to fully-fledged Marines. The Corps' attention to wartime publicity reaped post-war dividends. By 1918, the word "Marine" was virtually a household name. Rather than being associated with any particular duty, it conjured up visions of indomitable, elite fighters. By the 1920s, fiction and myth became more important than history in maintaining and perpetuating this image. Between 1861 and 1918, then, the Corps successfully made it mean something significant to be a Marine.