In the Bird Cage of the Muses: Archiving, Erudition, and Empire in Ptolemaic Egypt 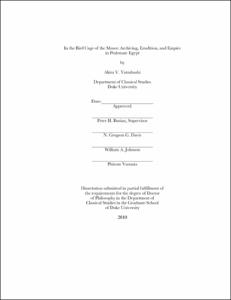 <p>This dissertation investigates the prominent role of the Mouseion-Library of Alexandria in the construction of a new community of archivist-poets during the third century BCE in the wake of Alexander the Great's conquests. I contend that the Mouseion was a new kind of institution--an imperial archive--that facilitated a kind of political domination that worked through the production, perpetuation, and control of particular knowledges about the world rather than through fear and brute force.

<p>Specifically, I argue that those working in the Mouseion, or Library, were shaping a new vision of the past through their meticulous editorial and compilatory work on the diverse remnants of the pre-conquest Greeks. Mastery of this tradition, in turn, came to form the backbone of what it meant to be educated (pepaideumenoi), yet even more importantly what it meant to be a Greek in this new political landscape. In contrast to many studies of politics and culture in the Hellenistic period which focus on the exercise of power from the top down, I explore how seemingly harmless or even esoteric actions, actions that seem far distant from the political realm, such as the writing of poetry and editing of texts, came to be essential in maintaining the political authority and structures of the Hellenistic monarchs.

<p>In developing this vision of the cultural politics of the Hellenistic Age, my first chapter examines the central role of the Mouseion of Alexandria in making erudition one of the key sources of socio-cultural capital in this ethnically diverse and regionally dispersed polity. Through the work of its scholars, the Mouseion and its archive of the Greek past became the center around which a broader panhellenic community and identity coalesced. In chapter two, I explore the implications of this new institution and social type through a close reading of Lykophron's enigmatic work, the Alexandra, presenting it as a poetic archive that used philological practices to make the past relevant to a new group of elite consumers scattered throughout the Hellenistic world by re-imagining the conflict between Europe and Asia. In the final chapter, I argue that this new institution gave rise to a new type of man, the archivist-poet. I examine how this new figure of subjectivity became one of the primary means of participating in Hellenistic empires of knowledge through the genre of literary epigram.