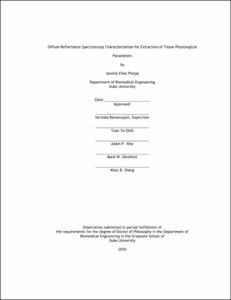 Variations in hemoglobin concentration can be indicative of a number of serious complications, including blood loss and anemia. Rapid, noninvasive measurements of hemoglobin are important in applications where blood status is reflective of patient well-being, such as in the emergency room, operating room, or the battlefield. Probe-based diffuse reflectance spectroscopy is capable of noninvasively quantifying tissue optical properties, including hemoglobin concentration. The quantification of hemoglobin concentration using optical methods is complicated by tissue scattering and the robustness of the algorithm and instrumentation used to interrogate the tissue. The sensing depth of diffuse reflectance spectroscopy can be tailored by the wavelengths of light and probe design used.

In this thesis, the accuracy and clinical viability of different diffuse reflectance spectroscopy implementations are presented. The robustness of an inverse Monte Carlo model, in which tissue optical properties are determined from measured reflectance using ultraviolet-visible (UV-VIS) wavelengths and a steady-state instrument, was tested using laboratory measurements. From the laboratory measurements, a set of references was identified which provided accurate absorption and scattering measurements, independent of the optical properties of the target. In addition, the ability to quantify hemoglobin concentration and saturation over large ranges and concentrations of multiple absorbers was established.

Following the laboratory measurements, a clinical study in which UV-VIS spectra were measured from the sublingual mucosa of patients undergoing surgeries was carried out. From this study, the correlations of extracted hemoglobin to expected blood hemoglobin were found to be improved when a simple ratiometric method based on isosbestic wavelengths of hemoglobin was used. During this study, the probe positioning in the mouth was found to be unwieldy, and so the transition to a more secure probe that could be taped to the hand was made.

In order to penetrate the overlying skin, near-infrared (NIR) wavelengths with a different probe geometry was explored. Further investigation of the inverse Monte Carlo model with NIR wavelengths was executed, and while in theory this combination should yield accurate optical property estimation, laboratory measurements indicated large errors, presumably due to the instrument or low magnitude and reduced spectral features of hemoglobin absorption in the NIR. Instead, the use of a well-established frequency-domain instrument coupled with diffusion approximation was implemented to measure spectra from the thenar eminence of volunteers undergoing induced hypovolemia and subsequent retransfusion. There were some moderate correlations with blood hemoglobin, but because both this method and the Monte Carlo method with mucosal probe placement showed higher variability with probe pressure than the isosbestic ratiometric method, further development of the ratiometric method was made.