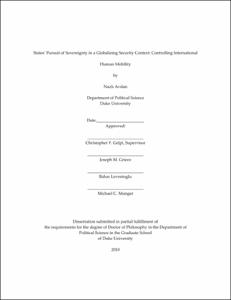 The goal of this dissertation is to inquire into how states balance economic motivations and security concerns when pursuing sovereignty at borders. More precisely, the dissertation examines tradeoffs between interdependence sovereignty -control over transborder flows--and Westphalian sovereignty defined as exclusion of external actors from states' authoritative space. Focusing on control over cross-border human mobility as the issue area, I put forward the <italic>securitized interdependence framework</italic> as a theory that encompasses economic and security logics of policy-making. Because migration control rests at the nexus of economic/material and geopolitical/military dimensions of state security, it provides an ideal testing ground for observing the interaction of economic and security motives. The theoretical framework draws on the literature on complex interdependence and the logic of the trading state to postulate empirically verifiable propositions on migration control policies.

The central claim of the dissertation is that human mobility is conditionally securitized and that security logics are modulated by material/economic incentives. Facing informational asymmetries vis-à-vis transnational terrorists, states rely on migration and border control strategies to screen and deter non-state threats to security. However, economic interdependence--trade and capital ties--mitigates fears over transnational terrorism by reconfiguring state preferences, bolstering the relative salience of material concerns in policy-making, tempering perceptions of threat, and creating vested interests at the domestic level.

To test the theory I have collected and compiled data on i)visa restrictions for pairs of 207 X 207 directed dyads ii)visa rejection rates for European Union and/or Schengen member countries for the period 2003-2007, and iii)asylum recognition rates for 20 select OECD recipient states for the period 1980-2007. I then use this data to test the implications of the theory by distinguishing between economic/voluntary and political/involuntary migration. Additionally, I tease out the distinct effects of two different types of security concerns over transnational terrorism: a reputational effect that considers origin country citizens' involvement in terrorism incidents worldwide and a targeted/directed impact through which states take into account past experience as targets of terrorism. To illustrate the effect of economic interdependence, I analyze trade and capital flows separately and illustrate that both types of commercial ties facilitate liberalization of controls over human mobility through direct and indirect mechanisms.

I employ a variety of statistical techniques to study the effect of economic and security concerns including several cross-sectional time series techniques, structural break and recursive residual tests for temporal change, and maximum likelihood. Furthermore, I complement my quantitative empirical analysis with an in-depth process tracing approach that traces the evolution of Turkey's migration policies in the context of Turkey's post-1980 economic liberalization. The qualitative analysis makes use of primary and secondary resources obtained from archival field work in Ankara and Istanbul, Turkey.

The dissertation demonstrates that the impact of security concerns over transnational terrorism is contingent on the type of migration policy under consideration. In particular, policies of control over involuntary/political migration are guided by humanitarian and normative motives, limiting the effect of security concerns. Furthermore, the securitization of visa policies is strongest if recipient states are directly targeted by incidents of transnational terrorism perpetrated by origin country nationals. While states take into account incidents of global terrorism ---attacks against other country nationals or territories by origin country citizens-- this channel of impact is more modest. Additionally, empirical results show that economic interdependence effectively undercuts the effect of global terrorism, driving migration control policies towards liberalization. In sum, the dissertation demonstrates that ways in which states assert interdependence sovereignty exhibit temporal and cross-sectional variation as well as functional differentiation across types of border and migration control policies.