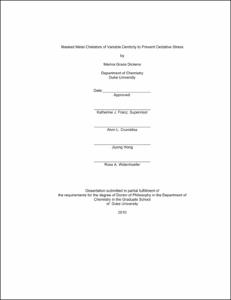 Cellular damage due to oxidative stress is implicated in a wide variety of conditions including degenerative diseases like Alzheimer's and Parkinson's Diseases. One source of oxidative stress is the interaction of redox-active metals such as copper and iron with hydrogen peroxide to produce hydroxyl radicals. Preventing metal-induced oxidative stress by metal chelation is one potential approach to treat some of these diseases, but there remain significant challenges in designing chelators that target damaging metals while not disturbing healthy metal ion distribution.

To overcome this challenge, prochelators that are responsive to conditions of oxidative stress have been introduced. By designing ligands that only bind metal ions in the presence of oxidants, damaging metals can be bound and removed while not perturbing the metals necessary for cell function. Masking the phenol of a chelator with a boronic ester creates a prochelator that has little to no affinity for metal ions until exposure to H2O2 converts the prochelator to the chelator, which is then available to bind metal ions. Described here is the development of boronate-based prochelators that react with H2O2 to produce chelating agents of variable denticity, ranging from 2 to 6.

Quinoline boronic acid pinanediol ester, or QBP, is a new bidentate prochelator introduced here that reacts with H2O2 with a rate of 0.22 M<super>-1</super>s<super>-1</super> to produce 8-hydroxyquinoline, a known metal-binding agent. Results in Chapter 2 show that QBP can be activated in vitro under conditions that mimic early Alzheimer's Disease pathology where copper, amyloid beta peptide, and ascorbic acid exacerbate formation of reactive oxygen species. QBP does not bind metal ions, nor does it disaggregate metal-promoted amyloid beta peptide aggregates. However, the released 8-hydroxyquinoline sequesters copper from amyloid beta and both diminishes further formation of reactive oxygen species and inhibits further aggregation of amyloid-beta.

The syntheses and crystal structures of hexadentate prochelators are described in Chapter 3, along with their rates of oxidation in response to hydrogen peroxide exposure and their ability to protect against hydroxyl radicals formed in vitro by iron (or copper), ascorbic acid, and hydrogen peroxide. The hexadentate chelators are based on a tripodal architecture in which three phenol moieties are linked via nitrogens on three alkyl arms to a central nitrogen to provide an N3O3 donor set for metal complexation. Of three prochelator/chelator pairs prepared, the pair (trenBsalam/trensalam) with amine linkages was deemed most suitable for potential biological studies. The prochelator trenBsalam oxidizes at a rate of 0.72 M<super>-1</super>s<super>-1</super> to produce the chelator trensalam in the presence of hydrogen peroxide. The transition metal coordination chemistry and metal ion affinities of trensalam were further studied in Chapter 4 by x-ray crystallography, UV/Vis spectroscopy and cyclic voltammetry.

The response of a series of bidentate prochelators to various oxidants, including hydrogen peroxide, superoxide, peroxynitrite and hypochlorite, was evaluated by UV/Vis spectroscopy in Chapter 5. Varying the diol that is appended to the boronic ester results in hydrogen peroxide oxidation rates ranging from 0.018 to 1.27 M<super>-1</super>s<super>-1</super>. Lastly, the stability of different boronic acid and diol combinations was probed by spectroscopic techniques and indicate that boronic esters formed with pinanediol form the most stable prochelators under physiological conditions.