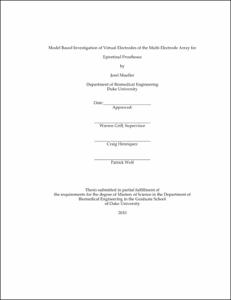 Visual prostheses are an emerging technology to restore vision in blind

individuals. The level of vision currently attainable with these prostheses is crude and

far from the level of normal vision though. Epiretinal prostheses work by using a multi-

stimulate the neural elements beneath the electrodes and produce punctate visual

power to construct pixilated images of the visual scene. There is the possibility of

electrodes of the array at once though. Although this would require more power, this

would effectively increase the resolution capabilities of the epiretinal prosthesis without

the need to increase the number of electrodes on the multi-electrode array. To

investigate the possibility of such a stimulation scheme, a computational model of the

constructed. The model response was validated against studies of biological ganglion

cells, and under comparable conditions reproduced features of epiretinal stimulation

seen clinically. The response of the computational model of the inner retinal layers to

determined to evaluate the possibility of producing phosphenes between the electrodes.

magnitude could not produce a distinct phosphene between the electrodes of the model.