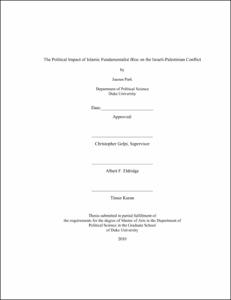 This study investigates the interaction between political influences of Islamic fundamentalist parties and the Israeli-Palestinian conflicts. The author selects four salient actors, based on five characteristics of contemporary Islamic fundamentalist groups: the Egyptian Muslim Brotherhood, the Palestinian Hamas, the Lebanese Hezbollah, and the Iranian conservatives. With evidences of intertwined supports among them, the author analyzes the cooperative bloc between a state and non-state groups. After Iranian conservatives came to power, Iran's political supports enhanced influences of Hezbollah and Egyptian Muslim Brotherhood, and then helped Hamas seize power finally. Their radical foreign policies intend to end Israeli occupation in the Palestinian territories. The theoretical model generates two predictions about strategies of the bloc. First, high political influence in each government is expected to worsen the Israeli-Palestinian conflicts. Second, due to Israel's strong military power, the expected strategy of the bloc is a symbolic war that more rhetoric and less Israeli casualties. Using cross-tabulation model, the author finds that the attack numbers are alone increased along with the high political influences, during the given period between 2000 and 2009. Their strong political power and secure cooperative bloc impede democratizing and promoting peace in the Middle East.