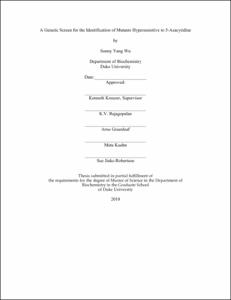 A DNA-protein crosslink is a covalent bond between DNA and a protein. It is a type of DNA damage that is relatively understudied. This study reports on the identification of a set of transposon mutants sensitive to 5-azacytidine, a DNA- protein crosslink induction agent that induces a crosslink between DNA and a DNA methyltransferase protein. The screen showed that certain recombination, DNA repair, and tRNA modification mutants are hypersensitive to 5-azacytidine. These included the recombination recA, recC, and recG mutants. Since the recombination mutants consistently show high sensitivity to aza-C, it suggests a role for recombination in DNA-protein crosslink repair. Western blots for the levels of methyltransferase protein showed that mutants have similar levels of methyltransferase protein compared to wild type cells, arguing that the mutants' hypersensitivity to aza-C is not because of increased methyltransferase levels. Western blots for the levels of SsrA tagging in the presence of 5-azacytidine showed that the tRNA modification transposon mutants miaA, mnmE, and mnmG are all defective in SsrA tagging, which likely explains their hypersensitivity. The SsrA tag Western blots also unexpectedly showed that the recA transposon mutant had reduced levels of SsrA tagging when treated with 5-azacytidine.