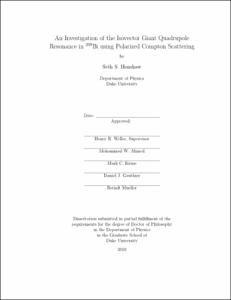 Giant multipole resonances are a fundamental property of nuclei and

arise from the collective motion of the nucleons inside

the nucleus. Careful studies of these resonances and their properties provides

insight into the nature of nuclear matter and constraints

which can be used to test our theories.

in 209Bi has been preformed using the High Intensity &gamma;-ray

polarized &gamma;-rays were incident upon a 209Bi target producing

nuclear Compton scattered &gamma;-rays that were detected using the HI&gamma;S

both parallel and perpendicular to the plane of polarization were

detected at scattering angles of 55&deg; and 125&deg; with

respect to the beam axis. This was motivated by the realization that

the term representing the interference between the electric dipole

(E1) and electric quadrupole (E2) amplitudes, which appears in the

theoretical expression for the ratio of the polarized cross sections,

changes sign as the incident &gamma;-ray energy is scanned over the E2

resonance energy. The ratio of cross sections perpendicular and

parallel to the plane of polarization of the incident &gamma;-ray were

measured for thirteen different incident &gamma;-ray energies between 15 and

The polarization ratio was calculated at 55&deg; and

125&deg; using a model consisting of E1 and E2 giant resonances as

well as a modified Thomson scattering amplitude. The parameters of the E1 giant

resonance came from previous measurements of the Giant Dipole

in 209Bi. The finite size of the nucleus was

accounted for by introducing a charge form factor in the (modified)

Thomson amplitude. This form factor was obtained from

measurements of the charge density in inelastic electron scattering

The resulting curves were fit to the data by varying the

E2 parameters until a minimum value of the &chi;2 was found.

The resulting parameters from the fit yield an IVGQR in 209Bi

The ability to make precise measurements of the parameters of the

IVGQR demonstrated by this work opens up new challenges to both

experimental and theoretical work in nuclear structure. A detailed

be performed. In addition, a systematic study of a number of nuclei

should be studied with this technique in order to carefully examine

the A dependence of the energy, width and sum rule strength of the

IVGQR as a function of the mass number A. The unique properties of

the HI&gamma;S facility makes it the ideal laboratory at which to perform

Such a data base will provide more stringent tests of nuclear

theory. The effective parameters of collective models can be fine

tuned to account for such precision data. This should lead to new

insights into the underlying interactions responsible for the nature

of the IVGQR. Furthermore, with the recent advances in computational

properties of nuclear matter which are responsible for the collective

behavior evidenced by the existence and properties of the IVGQR.