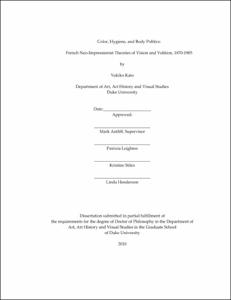 Color, Hygiene, and Body Politics: French Neo-Impressionist Theories of Vision and Volition, 1870-1905, explores the little studied "pragmatic" dimension of Neo-Impressionist theory and practice to reveal the full social and political import of Divisionist technique. Specifically, it examines how Neo-Impressionist painters such as Georges Seurat (1859-1891), Paul Signac (1863-1935), and Camille Pissarro (1830-1903), as well as their anarchist allies, applied artistic and political tenets to their daily practices, including hygienic habits and medical treatments. Neo-Impressionist Divisionism was based on a physiological awareness that the balanced use of three optical nerves generated a sense of harmony. By examining the ethical aspects of neuro-psychological color theories in nineteenth-century Europe, this research demonstrates that this awareness was not merely a matter of optics, but a part of the prevalent socio-ethical discourse of energy efficiency.

The second chapter, "Neuro-psychological Space in Color and Dynamism," explores how this behavioral discourse was visualized in Neo-Impressionist painterly space. Contrary to Kantian a priori space, prominent theorists, such as Taine, Spencer, and Ribot who influenced the Neo-Impressionists, upheld the idea of dynamic space. As the raison d'être for this new space resided in the dynamic interaction between the self and the world, action became fundamental to its formation. Color in such new spaces was the perceptual bedrock, since optical nerves defined external objects chiefly as color. This chapter underscores the connection between dynamism and color in painterly space, through which the viewer could voluntarily engage with the world.

The third chapter, "Therapeutic Color and the Neo-Impressionists' Daily Practices," delves into the Neo-Impressionists' health-related pursuits including their commitment to hydrotherapy, color therapy, and homeopathy, all associated with an ecological concern for the equilibrium between the self and the environment. This comprehensive examination reveals an overlooked behavioral aspect of Neo-Impressionist theory, which was a critical dimension of their world-view that sought to merge art and life. The first section examines the artists' commitment to bathing and hydrotherapy through an analysis of the art and writings of Camille Pissarro and his anarchist allies. The second part examines the theory of color therapy developed by Dr. Paul Ferdinand Gachet, and his impact on the Neo-Impressionists. In the final section, I consider the broader implications of the Neo-Impressionist embrace of homeopathic practices with reference to a theory of ecological equilibrium.