Realism, Race and Citizenship: Four Moments in the Making of the Black Body, Colombia and Brazil, 1853 - 1907 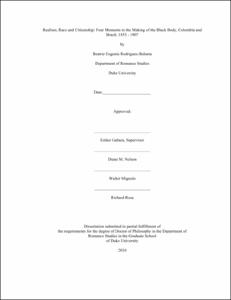 Realism, Race and Citizenship: Four Moments in the Making of the Black Body, Colombia and Brazil, 1853 - 1907 investigates the visual and literary mechanisms used to refurbish racial and social hierarchies in Brazil and Colombia in the aftermath of the abolition of slavery. Chorographic paintings, scientific photographs, identification documents, and naturalist literature are taken to together to argue that: on the one hand, the slave is the fleshy object that defines freedom and, in the postcolonial moment, citizenship. In "Realism, Race and Citizenship: Four Moments in the Making of the Black Body, Colombia and Brazil, 1853 - 1907," I propose that in geo-political spaces where the abolition of slavery and the re-branding of work were intensely debated and violently fought over, realist programs of representation facilitated the propagation of modern racializing schemas. Chapters 1 and 2 study the watercolors created for the Comisión Corográfica (the pre-eminent mapping project of nineteenth century Colombia) and scientific photographs produced in Brazil. These chapters uncover the stylistic conventions that make possible the staging of blackness as visible and immutable biological inferiority and as cumulative category that encompasses a variety of physical and social characteristics including but not limited to skin color, occupation, costume, and physical environment. Chapters 3 and 4 argue that the disavowal of slavery structures Brazilian naturalist novels such as O Cortiço (Aluísio Azevedo, 1890) as well as legislative debates about the nation and the citizen. By focusing on the visual and narrative orchestration blackness, my dissertation provides a critical framework for understanding how realist aesthetic conventions configured (and continue to animate) discourses of race and citizenship in Brazil and Colombia.