Toxicogenomic Responses to Inorganic and Organic Mercury in Caenorhabditis elegans 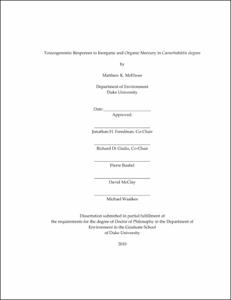 The relative toxicity of mercuric chloride (HgCl2) and methylmercury chloride (MeHg) in C. elegans was determined by testing the effect of mercurial exposure on growth, reproduction and induction of stress-response genes. MeHg was more toxic than HgCl2, though the difference in toxicity between the two mercurials varied by assay. Using approximately sub-, low- and high toxic exposures to both mercurials, microarrays were performed to determine the effects of the HgCl2 and MeHg on transcription. A total of 473 genes were differentially expressed in the three HgCl2 treatments, while a total of 2865 genes were differentially expressed in the three MeHg treatments. Analysis of the microarray data by hierarchical clustering, principal components analysis and a self-organizing map indicated that the transcriptional effects of the two mercurials were vastly different. Gene Ontology analysis and pathway mapping indicated that the two mercurials had very different effects on biological processes as well.

The biological function of genes up-regulated by mercurials was tested using RNA interference (RNAi). The effect of RNAi and mercury co-exposure on C. elegans growth was tested for 599 genes. Knock-down of 18 of these genes was found to significantly affect growth of C. elegans exposed to mercury. Of these 18 genes, only 2 were found to significantly affect growth in response to both mercurials.

ABCG2, BACE1, BACE2, CHKA, CHKB, ELOVL3, ELOVL6, GCLC and PARG are human homologs of the genes found to significantly affect growth of C. elegans in mercury exposure. The effect of sub-, low-, and high-toxic treatments of both mercurials on expression of these genes was tested using three cell lines: SK-N-SH, HepG2 and HEK293. Of these 162 cell-gene-mercury-toxicity combinations, there were 36 in which the gene was differentially expressed. In 24 of these, the gene was significantly differentially expressed by only one of the mercurials. The evolutionary conservation of function of these genes in mercury exposure was tested using RNAi. A total of 11 significant gene-mercury interactions were found between the three cell lines, but there was not a cell type-gene combination in which exposure to both mercurials was found to significantly affect cytotoxicity.

In whole organism and cell culture studies, inorganic and methylmercury were found to have different effects on transcription. In both systems, there was very little overlap in the genes involved in mercury resistance and susceptibility. These data indicate that molecular mechanisms of toxicity differ by mercurial.