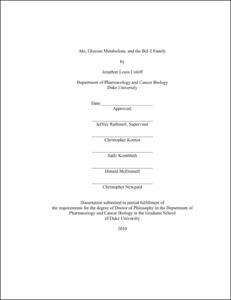 Normal cells require input from extrinsic growth factors to control proliferation and survival. Recent studies have demonstrated that these same extrinsic signals also regulate cellular metabolism to ensure that metabolism adequately supports the demands of cell function, proliferation, and cell survival. The PI3K/Akt pathway is downstream of many growth factors and can promote both glucose metabolism and cell survival. Aberrant activation of the PI3K/Akt pathway is common in cancer, and its activation can contribute to the growth factor independence that is a hallmark of neoplastic cells. Metabolic demand is high in stimulated and leukemic T cells, and activation of Akt can increase glucose metabolism to meet these requirements. There is great interest in targeting the unique metabolism of cancer cells for cancer therapy, thus making an understanding of the interaction of metabolism and cell death essential.

After growth factor withdrawal, active Akt suppressed Puma induction in abundant glucose, but Puma was rapidly upregulated in glucose-deficient conditions and was necessary and sufficient to promote efficient cell death. Importantly, glucose was not uniquely required, as provision of alternative mitochondrial fuels allowed Akt to suppress Puma and maintain survival. This metabolic regulation of Puma was mediated through partially p53-dependent transcriptional induction as well as control of Puma protein stability.

In addition to inhibiting Puma expression, active Akt prevented the loss of Mcl-1 after growth factor withdrawal by sustaining Mcl-1 protein synthesis in a glucose-dependent manner. Mcl-1 was essential for preventing Bim-induced apoptosis, as Akt could not inhibit Bim induction after growth factor deprivation. Slowing of Mcl-1 synthesis by inhibiting glucose metabolism reversed Mcl-1-mediated resistance of leukemic cells to the Bcl-2 inhibitor ABT-737. Importantly, Akt and glucose-reliant Mcl-1 expression required mTOR-dependent phosphorylation of 4EBP, and treatment with mTOR inhibitors also reversed ABT-737 resistance.

Together, this study demonstrates that Akt promotes cell survival by preventing metabolic checkpoints that stimulate Puma expression and stability and inhibit Mcl-1 synthesis, advancing our understanding of the links between metabolism and cell death. These studies highlight the importance of cellular metabolism--including a potential role for the alternative sugar fructose--in cancer cell survival that may provide a mechanistic understanding to drive development of metabolism-targeted cancer therapies.