Characterization of the Actin Nucleator Cordon-bleu in Zebrafish 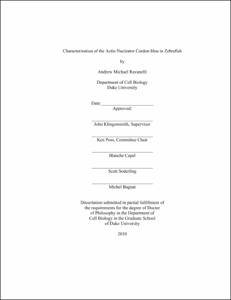 The means by which cells, tissues, and organisms undergo morphogenesis are variable and highly regulated, and the mechanisms that govern cellular changes in response to signaling cues are poorly understood. This study seeks to address the role of a newly characterized protein in zebrafish in translating signaling cues into physical changes within a cell.

The <italic>Cordon&ndash;bleu (Cobl)</italic> gene is widely conserved in vertebrates, with developmentally regulated axial and epithelial expression in mouse and chick embryos. <italic>In vitro</italic>, Cobl can bind monomeric actin and nucleate formation of unbranched actin filaments, while in cultured cells it can modulate the actin cytoskeleton. However, an essential role for Cobl <italic>in vivo</italic> has yet to be determined. We have identified the zebrafish <italic>cobl</italic> ortholog and have used zebrafish as a model to assess the requirements for Cobl in embryogenesis. We find that cobl shows enriched expression in ciliated epithelial tissues during zebrafish organogenesis. The utilization of antibodies developed against Cobl shows that the protein is concentrated along the apical domain of ciliated cells, in close proximity to the apical actin cap.

Reduction of <italic>cobl</italic> by antisense morpholinos reveals an essential role in embryonic morphogenesis and organ development. A requirement for Cobl was shown for the proper function of various and ciliated epithelial organs. Cobl appears to direct the elongation of motile cilia in organs such as Kupffer&rsquo;s vesicle and the pronephros. In Kupffer&rsquo;s vesicle, the reduction in Cobl coincides with a reduction in the amount of apical F-actin. Additionally, Cobl may play a role during gastrulation cell movements and convergence and extension morphogenesis during early embryonic development. Thus, Cobl may represent a molecular activity that couples developmental patterning signals with local intracellular cytoskeletal dynamics to support elongation of motile cilia and tissue morphogenesis.