The Ecology of Sharing Mutualists: Consequences for Plant Performance and Population Dynamics 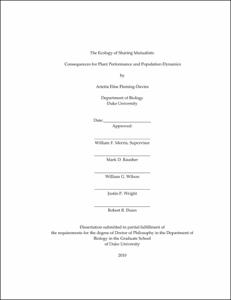 Although we often study mutualisms (interactions in which both species benefit) at the level of the individual partners, mutualistic interactions take place in the context of populations and communities. Sharing mutualists with others in a population could result in indirect interactions in the form of mutualist-mediated competition or facilitation. In my dissertation work I asked whether intraspecific competition or facilitation for ants might occur in an extrafloral nectary-bearing (EFN) plant, and what the consequences would be for long-term population dynamics of the plant. My focal species was <italic>Colubrina spinosa</italic> (Rhamnaceae), a neotropical treelet on which I observed 69 ant species at La Selva Biological Station, Costa Rica.

Demonstrating intraspecific competition for mutualists requires that 1) neighbor densities affect mutualist visits to an individual, and 2) change in mutualist visits results in reduced benefit. To determine how mutualist density affects plant benefit, I experimentally manipulated ant abundances on plants over two years and measured growth and survival. To assess competition for mutualists, I excluded ants from conspecific neighbors and followed ant abundance on focal plants. To consider long-term facilitation, in which greater local nectar resources increase local ant abundance, I manipulated nectar resources in a two-year field experiment and estimated ant abundance on <italic>C. spinosa</italic> plants and on baits.

Considering local neighbor density both within a 1m radius and in 5x5 m plots, ant densities on <italic>C. spinosa</italic> plants showed evidence for a small-scale competition effect and a contrasting plot-level facilitation effect. The small-scale competition was sized-based; smaller plants lost ants to larger plants. Ant benefit to plants also depended on plant size. For larger plants, those with greater size-adjusted ant density had higher growth and survival than those with fewer ants than expected for their size.