We Are from Before, Yes, but We Are New: Autonomy, Territory, and the Production of New Subjects of Self-government in Zapatismo 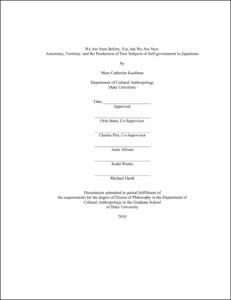 The 1994 Zapatista uprising in Chiapas, Mexico, created a rupture with a series of neoliberal policies implemented in Mexico and on a global scale over the last few decades of the 20th century. In a moment when alternatives to neoliberal global capitalism appeared to have disappeared from the world stage, the Zapatista Army for National Liberation (EZLN) initiated a movement and process that would have significance not only in Chiapas and for Mexico, but for many struggles and movements around the world that would come to identify with a kind of "alter-globalization" project. This dissertation examines the historical moment of neoliberal globalization, what the EZLN calls the "Fourth World War," the Zapatista initiative to construct an alternative political project, and the importance of this process of rupture and construction for our understanding of social organization, political participation, struggle and subjectivity.

Taking up theories of new forms of domination as dispersed forms of power operating through non- state institutions and a kind of participative subject in the public realm (following Raúl Zibechi and Stefano Harney), I argue that lines of antagonism can no longer be drawn between public and private, or state and non-state realms, but must be viewed as different strategies of subjectification, one as the subject-making of a form of governance, still but more subtly a form of domination, and one as a form of struggle for collective self-making. While both forms employ mechanisms and imaginaries of cooperation, the former cultivates subjective compatibility with an existing system while the latter I associate with the Zapatista concept and practice of autonomy.

Drawing on several years of fieldwork in Chiapas as well as the extensive theoretical work of the Zapatistas themselves, I trace the development of Zapatista autonomy as a concept and exercise of power and in its implementation as a system of self-government and provision of services through the construction of autonomous territory. This use and understanding of power has been both encouraged by and enabling of the autonomous judicial, health, education, communication and production systems in Zapatista territory. My argument here is that, beyond control over land, services, and the mode of production, territorial and political autonomy has permitted the Zapatistas to create an entire system of "new" social relations, an ecology of practices that create a mutually constructive relationship between (autonomous) system and (self-determined) subject in a cycle that continually widens and deepens the scope of what is possible for both. I then turn to an investigation of the Zapatista initiative to create a larger political project, and a more extensive and diverse collective subject of struggle, through the launching of the "Other Campaign" as a non-electoral anti-capitalist movement. If governance as a new form of domination performs the function of interpellating individuals into, using Stefano Harney's terms, a "class with interest" identifiable by its stakes in the system, I understand the Other Campaign to be a project to gather those "without interest," often considered expendable or dangerous to the system or "society" in general, into a "class beyond interest," a self-determined community engaged in a struggle not for a moment of liberation to be won but as the construction of emancipation as a way of life.