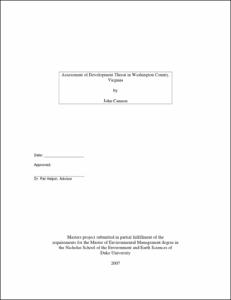 View / Download
5.0 Mb
Date
Author
Cannon, John
Advisor
Halpin, Pat
Repository Usage Stats
267
views
522
downloads
Abstract
The use of development threat as a tool in conservation prioritization is becoming increasingly common. When used as a component of a larger planning methodology that may include factors such as biological integrity, area, and connectivity, degree of threat may help an organization to protect a larger amount of land that it would otherwise have been able to. I develop two models of development: one to predict the threat of development for Washington County, Virginia (based on structures built between ~1960 and 2006) and a second to examine how settlement patterns have changed over time (based on structures built before 1938). Variables that are incorporated into the pre-1938 model include: elevation, slope, Euclidean distance to roads, Euclidean distance to towns, and relative elevation. Logistic regression results in negative coefficients for all of the predictor variables, all of which are significant except for elevation. The strongest predictor variables were slope and relative elevation. The model had high accuracy, with a value of 81.4% obtained for a calibration dataset. Variables included in the ~1960-2006 model include: Euclidean distance to roads, slope, relative elevation, Euclidean distance to fire and rescue stations, and Euclidean distance to schools. Logistic regression results for the 1960-2006 model differ from those reported for pre-1938 settlement. Distance to towns is no longer a significant predictor, elevation is less significant, and relative elevation is positively correlated with development potential (for locations near roads). Negative coefficient values still exist for slope and Euclidean distance to roads, as well as for the new variables Euclidean distance to fire and rescue stations, and Euclidean distance to schools. The accuracy of the model was slightly less than the pre-1938 model of development, but still a decent 76.6%. Overall, these results show a change in development patterns over time, with people becoming less limited by distance to towns and high elevations, and the evidence of a preference for house sites at a high relative elevation near roads.
Type
Master's project
Department
Nicholas School of the Environment and Earth Sciences
Subject
Conservation prioritization
Development threat
Washington County, Virginia
Permalink
https://hdl.handle.net/10161/309
Citation
Cannon, John (2007). Assessment of Development Threat in Washington County, Virginia. Master's project, Duke University. Retrieved from https://hdl.handle.net/10161/309.
Collections
More Info
Show full item record