Growth, Characterization, and Modification of Vertically Aligned Carbon Nanotube Films for Use as a Neural Stimulation Electrode 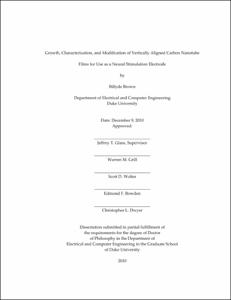 Electrical stimulation is capable of restoring function to a damaged or diseased nervous system and can thereby improve the lives of patients in a remarkable way. For example, cochlear and retinal prostheses can help the deaf to hear and the blind to see, respectively. Improvements in the safety, efficacy, selectivity, and power consumption of these technologies require a long-term biocompatible, chemically and mechanically stable, low impedance neural electrode interface which can rapidly store high charge densities without damaging the electrode or neural tissue.

The results indicated that electrochemical activation by potential cycling across the water window, a technique often used to activate and greatly improve the performance of iridium oxide electrodes, was also favorable for carbon nanotube (CNT) electrodes especially for thicker films. In addition, oxidative thermal treatments that did not significantly oxidize or etch the nanotubes caused a significant improvement in electrode performance. Phenomenological models were developed from these findings. Finally, growth of aligned CNTs using a platinum catalyst was demonstrated and suggested to reduce biocompatibility concerns due to otherwise highly toxic catalyst residue inherent in CNTs that may become bioavailable during chronic use.