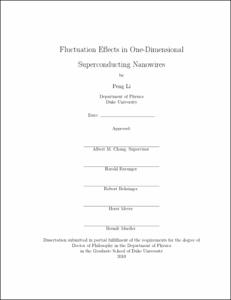 This thesis focuses on the fluctuation in the switching current $I_s$ of superconducting Al nanowires. We discovered that the maximum current which nanowires can support is limited by a single phase slip at low temperature.

Al superconducting nanowires less than 10 nm wide were fabricated based on a MBE grown InP ridge template in an edge-on geometry. The method utilizes a special substrate featuring a high standing 8nm-wide InP ridge. A thin layer of Al was evaporated on the substrate and Al on the ridge formed nanowires.

The nanowire switches from the superconducting state to the normal state as the current is increased. Ideally, the maximum current is set by a pair-breaking mechanism, by which the kinetic energy of quasi-particles exceeds the bonding energy of Cooper pairs. This is called the critical current, $I_c$. In practice, the measured maximum current, called the switching current $I_s$, cannot reach $I_c$ because of the phase slip.

The superconducting nanowires with normal leads were also studied. One of the distinctive properties of our nanowire (the critical field of 1D nanowire is 10 times larger than that of a 2D superconducting film) allowed us to study the same nanowire with different leads (superconducting or normal). Both the average $I_s$ and the fluctuation in $I_s$ differed qualitatively depending on whether the leads were superconducting or normal. The temperature dependence of the average $I_s$ followed the $I_c$ of the Josephson junction instead of the phenomenological pair-breaking $I_c$. The difference was found to depend on both the temperature (close to $T_c$ or 0) and the length (shorter or longer than the charge imbalance length). Our study also showed that nonlinear current-voltage (IV) curves were observed due to the inverse-proximity effect.