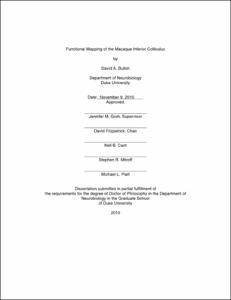 The study of neural phenomena often depends critically on functional maps. Physiologists use topographic organization to identify the location of neural recordings, and in turn to relate activity patterns to underlying anatomy. In this work I investigated the functional architecture of the inferior colliculus (IC) in rhesus monkeys. The IC is an important site of convergence along the mammalian auditory pathway, composed of a number of anatomically and functionally defined regions. I mapped responses to tonal stimuli and acoustic noise in the IC and surrounding tissue using a systematic method, collecting extracellular electrophysiolgical data at evenly placed locations. I found three well organized regions: a central core that showed a topographic organization of sound tuning properties, a surrounding shell that contained neurons tuned to low frequency sounds, and a peripheral area that showed little tuning to frequency. The parcellation of the IC based on tuning properties was confirmed using measures of temporal properties of responses. I then put the map to use, to ask how two non-auditory signals are distributed within the structure. I found that neurons sensitive to eye position are spread throughout the IC, including in the central core region associated with the primary ascending auditory stream. This result has an important implication for models of sensory integration, namely that information from multiple senses meets early, in an area previously thought to be unisensory. Neurons that showed changes in activity directly linked to the presentation of a visual stimulus were less evenly distributed, and only weak responses were found in the core region. Nonetheless, visual sensitivity was not confined to a small subregion of the IC. The results challenge the notion that the senses are combined in nuclei specialized for this purpose.