Investigation of Chondroprotective Mechanisms of Selenium 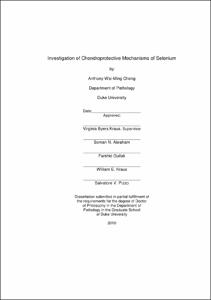 Selenium (Se) is an essential trace element and metalloid involved in several key metabolic activities: protection against oxidative damage, regulation of immune and thyroid function, and fertility. Several recent lines of evidence from epidemiology, genetic, and transgenic animal studies suggest that Se may play a protective role in Osteoarthritis (OA). However, the exact protective mechanism of Se is still unclear.

In this study, we hypothesized that Se exerts its chondroprotective benefit via an anti-oxidative and anti-inflammatory effect mediated by specific selenoproteins that neutralize cytokine-induced inflammatory responses in chondrocytes. We established an in vitro system for studying the effect of Se in the chondrosarcoma cell line SW-1353 and in human primary chondrocytes. Selenomethionine (SeMet) induced gene expression and enzyme activity of both antioxidative enzymes glutathione peroxidase (GPX) and thioredoxin reductase (TR) in SW-1353 cells. Our data suggest that Se may be protective against oxidative stress through regulation of the activity of these antioxidative enzymes.

In summary, the result of this study suggests that Se may exert its chondroprotective effect through specific selenoproteins which neutralize oxidative stress and modify the inflammatory response in chondrocytes.