The role of poly(A)-binding protein in microRNA-mediated repression 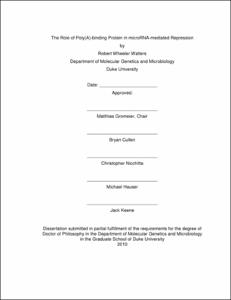 microRNAs (miRNAs) downregulate the expression of numerous mRNAs and are involved in almost every biological process where they have been examined. Inherent sequence or cis-elements located in mRNA termini and 5' and 3' UTRs likewise influence post-transcriptional gene regulation. We delineate the relative importance of the 5' m7G-cap, the 3' poly(A) tail, and Internal Ribosome Entry Sites (IRESs) in miRNA-mediated repression. mRNA targets must contain a m7G-cap to be repressed, are repressed to a greater extent when containing a poly(A) tail, and are not precluded from repression when translating via an IRES.

miRNAs can inhibit translation and / or induce mRNA decay. While the core effector proteins are established, mechanistic details of how miRNAs interfere with mRNA translation and stability remain elusive. Contrary to the repressive effects of miRNAs, the poly(A)-binding protein (PABP) (through binding to the poly(A) tail and eIF4G) can increase both translation and mRNA stability independently. We elucidate a functional role for the PABP in miRNA repression; manipulation of `active' PABP levels affects repression conversely in part by inhibiting miRNA-induced deadenylation. Furthermore, we find that expression changes in the PABP binding partner PABP interacting protein 2 (Paip2) modulates both miRNA repression and PABP protein complex formation. Additionally, we establish Paip2 as a bona fide miR-128 target, and demonstrate miR-128 de-repression of non-miR-128 target mRNAs through this targeting event.