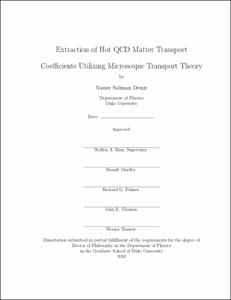 Ultrarelativistic heavy-ion collisions at the Relativistic Heavy-Ion Collider (RHIC) are thought to have produced a state of matter called the Quark-Gluon-Plasma (QGP). The QGP forms when nuclear matter governed by Quantum Chromodynamics (QCD) reaches a temperature and baryochemical potential necessary to achieve the transition of hadrons (bound states of quarks and gluons) to {it deconfined} quarks and gluons. Such conditions have been achieved at RHIC, and the resulting QGP created exhibits properties of a near perfect fluid. In particular, strong evidence shows that the QGP exhibits a very small shear viscosity to entropy density ratio &eta/s, near the lower bound predicted for that quantity by Anti-deSitter space/Conformal Field Theory (AdS/CFT) methods of &eta/s = $hbar$/ 4 &pi $k_B$ where $hbar$ is Planck's constant and $k_B$ is Boltzmann's constant. As the produced matter expands and cools, it evolves through a phase described by a hadron gas with rapidly increasing $eta/s$.

This thesis presents robust calculations of $eta/s$ for hadronic and partonic media as a function of temperature using the Green-Kubo formalism. An analysis is performed for the behavior of $eta/s$ to mimic situations of the hadronic media at RHIC evolving out of chemical equilibrium, and systematic uncertainties are assessed for our method. In addition, preliminary results are presented for the bulk viscosity to entropy density ratio $zeta/s$, whose behavior is not well-known in a relativistic heavy ion collisions. The diffusion coefficient for baryon number is investigated, and an algorithm is presented to improve upon the previous work of investigation of heavy quark diffusion in a thermal QGP.

By combining the results of my investigations for $eta/s$ from our microscopic transport models with what is currently known from the experimental results on elliptic flow from RHIC, I find that the trajectory of $eta/s$ in a heavy ion collision has a rich structure, especially near the deconfinement transition temperature $T_c$. I have helped quantify the viscous hadronic effects to enable investigators to constrain the value of $eta/s$ for the QGP created at RHIC.