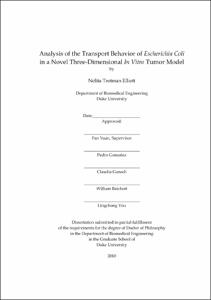 Three-dimensional (3D) tumor models aim to reduce the need for animal models for drug and gene delivery studies. However, many models are not conducive to environmental manipulation and may not be easily adapted for <italic>in situ</italic> microscopic analysis of transport phenomena. One goal of this study was to develop a 3D tumor model that can mimic 3D cell-cell interactions to mimic native tumor tissues.

To this end, a novel 3D microfluidics-based tumor model was created which allowed the overnight culture of a high density of tumor cells and could be used for small molecule penetration studies. This microfluidic device facilitated the loading of B16.F10 tumor cells in a densely-packed three-dimensional arrangement in a micro-channel which was accessible for nutrient supply via channels on either side through which culture media was continuously infused. Cell volume fraction in the micro-channel was determined via nuclear staining and counting of cells immediately after loading and after a 12-hr culture period. The average volume fraction of cells in this model was 0.32 immediately after loading and 0.26 after 12-hr culture. The values are comparable to cell volume fractions of the <italic>in vivo</italic> B16.F10 tumor previously measured in our lab. The reduction in cell volume fraction after overnight culture was due to the change in cell morphology to become more elongated after time in culture. Cell-cell adhesions appeared to have formed during culture, resulting in more uniform packing.

There are many barriers to gene delivery to tumors which highlight the importance of selecting an effective gene carrier system. Some pathogenic bacteria have been investigated as gene delivery vectors because of their innate ability to selectively proliferate in tumor environments. However, pathogenicity concerns arise when trying to achieve therapeutic levels of gene expression. It has been shown that non-pathogenic bacteria such as <italic>E. coli</italic> can be engineered to invade mammalian cells and participate as gene delivery vehicles. Hence, the second part of this research project involved the use of the newly developed microfluidic 3D tumor model previously described to visualize the transport behavior of invasive (inv+) and non-invasive (inv-) <italic>E. coli</italic>. The inv+ bacteria harbored a plasmid containing the inv gene encoding the protein invasin that binds to &beta1 integrin receptors on the surface of mammalian cells resulting in the phagocytosis of invasin-expressing bacteria by normally non-phaogcytotic cells. Two tumor cells lines were used: B16.F10 and EMT6, which have been shown to differ in expression of &beta1 integrins. The bacteria were also engineered to express mCherry for fluorescent detection.

A suspension of tumor cells and bacteria was loaded into the microfluidic device and cultured for 12 hrs before imaging bacteria distribution throughout the cell culture. Proliferation of inv+ bacteria was generally uniform throughout the cell compartment in the B16.F10 model and bacterial cells were primarily concentrated outside of cells. Bacteria that were internalized did not appear to migrate far from the plasma membrane of the tumor cell. The non-invasive bacteria proliferated to a much greater extent than the invasive form and this proliferation was also generally uniform throughout the cell compartment. Proliferation of both invasive and non-invasive bacteria in the EMT6 model was less uniform than in the B16.F10 model. Overall bacterial concentration appeared to be lower in the EMT6 model. Viability staining after bacterial infection showed that tumor cells in the 3D model were able to maintain viability despite bacterial cell proliferation.

An additional assay was conducted in culture plate wells to determine the effect of chemical factors secreted by tumor cells on bacterial cell proliferation. The results of this assay revealed that tumor cells may be secreting anti-microbial factors that inhibit the proliferation of bacteria and that the binding of invasin-expressing <italic>E. coli</italic> to tumor cells may further promote the release of these factors.

The results of this study suggest that tumor cell type plays a major role in the distribution and proliferation of bacteria in a 3D environment. The ability to visualize bacterial spread throughout a 3D tumor model will prove to be useful for observing the effect of various genetic modifications on the transport and gene delivery efficiency of <italic>E. coli</italic>.