Uneven Modernities, Uneven Masculinities: Manliness and the Galician Hinterland in the Novels of Emilia Pardo Bazán (1882-1896) 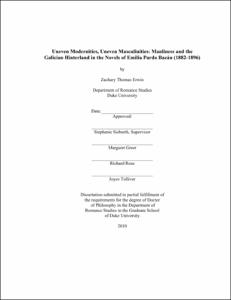 The late-nineteenth-century realist canon in Spain is filled with male characters who are physically weak, effeminate, ineffectual, infantilized, or impotent, and, thus, decidedly "unmanly," which indicates a collective societal anxiety about masculinity in Spain at the end of the nineteenth century. I argue that this anxiety about masculinity stems from another societal worry about Spain's backwardness with respect to its more modern European neighbors and the uneven rate of modernization with its own borders. I explore these issues in four novels by Galician-born realist author Emilia Pardo Bazán: <italic>La Tribuna</italic> (1882), <italic>Los Pazos de Ulloa</italic> (1886), <italic>La Madre Naturaleza</italic> (1887), and <italic>Memorias de un solterón</italic> (1896). I analyze these texts in light of historical and theoretical work on post-Enlightenment masculinity by scholars, such as George Mosse, John Tosh, Christopher Forth, and R. W. Connell.

In the first chapter, I trace the development of the post-Enlightenment, Western, model of manliness, a primarily urban, bourgeois phenomenon, which privileged rational intellect and individual hard work. I then compare the pace and extent of modernization in Spain and England to show how Spain lacked the material conditions that would allow most Spanish men to embody modern masculinity in the late nineteenth century. For the remaining chapters, I turn my attention to <italic>Los Pazos de Ulloa</italic>, <italic>La Madre Naturaleza</italic>, and <italic>Memorias de un solterón</italic>. Each of these novels shows, in different ways, how the modern masculine ideal coexists and conflicts with other pre-Enlightenment models of manliness--based on aristocratic leisure, military prowess, or brute force. I argue that the problems faced by the male characters in these novels are a direct result of this clash of masculinities, which in turn reflects Spain's economic stagnation in the nineteenth century. In Chapter II, I show how the refusal of the rural, Galician aristocracy to embrace certain hallmarks of the modern masculine ideal, such as hard work and Enlightenment thought, leads to a destabilization of feudal hierarchies in <italic>Los Pazos de Ulloa</italic>. I then argue that this destabilization results in the pervasiveness of violence in the novel. Chapter III focuses on <italic>La Madre Naturaleza</italic>. I contend that its narrator recognizes that change must come to rural Galicia and, thus, makes a gesture toward reconciling traditional and modern values, as well as pre-Enlightenment and post-Enlightenment models of masculinity. I then show how this reconciliation ultimately fails because the narrator condemns the social mobility upon which modernization and modern masculinity depend. In Chapter IV, I discuss the importance of marriage and fatherhood to the enactment of modern masculinity in <italic>Memorias de un solterón</italic>. I then illustrate how, in the Galician provincial capital in which the novel is set, social and economic conditions make life as a bourgeois husband and father undesirable at best, and ruinous at worst.