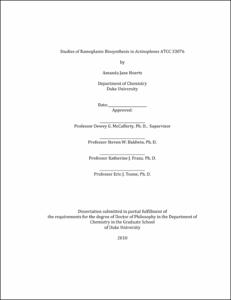 The natural progression from the introduction of an antibiotic into the market to the emergence of resistant strains demands the constant influx of new drugs to treat infection. Ramoplanin A2, a drug with demonstrated resistance against antibiotic-resistant Gram-positive pathogens, is currently in clinical trials. Ramoplanin is composed of seventeen amino acids condensed with a N-acylated fatty acid tail and a sugar moiety. The biosynthesis of this important metabolite is performed by a host of enzymes including non-ribosomal peptides synthetases, fatty acid biosynthetic enzymes, glycosyltransferases, and other tailoring enzymes.

In the introductory chapter, the significance and mechanism of the family of ramoplanin antibiotics will be discussed. The biosynthetic cluster of the lipoglycodepsipeptide ramoplanin and its sister antibiotic enduracidin will be outlined and the previous work on this cluster summarized. The proposed formation of the critical N-acylated tail and the parallels to fatty acid biosynthesis will also be described in detail. Chapter two describes the development of an expression system to successfully isolate proteins of interest from the ramoplanin biosynthetic cluster. In addition to increasing the yields of proteins already expressing in heterologous hosts, this technique facilitated the isolation of previously unattainable proteins. This chapter also details the demonstration of their activity through a variety of biochemical techniques.

Chapter three details the kinetic characterization of Ramo16, a NAD-dependent &#946;-ketoacyl reductase, critical for the formation of the N-acylated fatty acid chain attached to Ramoplanin. Sequence analysis and characterization of the product of the Ramo16 reaction also implies that the biosynthesis of the N-acylated tail of ramoplanin bears significant similarity to type II bacterial fatty acid biosynthesis. These observations have led to a new proposal for the biosynthesis of the N-acylated fatty acid attached to ramoplanin. Further supporting these conclusions, chapter four details the examination of the stereochemistry of the hydrogen removed from the nicotinamide adenine dinucleotide cofactor and the stereochemistry of the product of the enzymatic reaction.

Chapter five describes the 1.4 Å crystal structure of ramoplanin in the presence of CTAB, an amphipathic membrane phospholipid mimetic. Observation of the location of the N-acylated fatty acid allows interpretation of its critical role in the activity of ramoplanin. The formation of the dimer and the interactions between the two molecules of ramoplanin and ramoplanin and the surroundings were examined in detail and supported earlier structure activity relationships. These observations have led to a new model for ramoplanin and Lipid II recognition in the context of the bacterial membrane. Enduracidin, ramoplanin's sister antibiotic, is produced by S. fungicidicus. Development of fermentation conditions for this strain allowed the isolation of appreciable amounts of enduracidin and 15N-labeled enduracidin, which was used to examine enduracidin's binding to Park's nucleotide, a cell wall precursor to Lipid II, by 2D 1H- 15N HSQC NMR. Although chemical shifts in the HSQC spectrum indicated binding, insoluble fibril formation complicated interpretation and necessitated the use of crystallography to determine the interaction with the substrate. Initial crystal conditions have been determined and diffraction images have been collected at 3.0 Å. Higher resolution images are pending to determine this structure.

Finally, chapter six discusses the development of a technique to transform S. fungicidicus and introduce plasmids to obtain deletion and insertional disruption mutants. A high throughput PCR screen was determined to enable large batch screening of potential mutants. This technique may be applied to study the function of genes in the pathway by fermenting production of enduracidin and examining the results.