Examination of the Molecular Epidemiology, Expansion, Population Structure, and Virulence of the Emerging Fungal Pathogen,<italic>Cryptococcus gattii</italic> in the United States 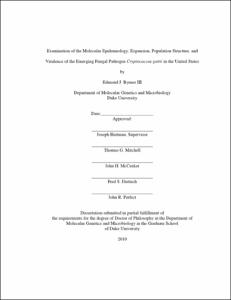 <italic>Cryptococcus gattii</italic> has been actively emerging and adapting to the climates and environment in western North America, bringing with it life-threatening disease to humans and animals. Through systematic investigations of the dynamics of this pathogen in the United States, by studying outbreaks and individual cases, our studies have aimed to increase the understanding of the expansion, emergence, pathogenicity, molecular epidemiology, population structure, and speciation dynamics of this organism that had previously been largely restricted to tropical and sub-tropical climates of the world. <BR> <BR>

Molecular sequence typing has revealed that there are four distinct <italic>C. gattii</italic> molecular types (VGI-VGIV). A major focus of our efforts to examine this pathogen in the United States surrounds the unprecedented <italic>C. gattii</italic> outbreak that emerged in British Columbia, Canada in 1999 and has since expanded throughout the Pacific Northwest region of the United States (Chapters 2, 3). This outbreak has resulted in a large number of infections in both humans and animals, including a high percentage of otherwise healthy individuals. The outbreak isolates are primarily molecular type VGIIa (the major genotype), VGIIb (the minor genotype), or VGIIc, a novel genotype that emerged in Oregon in approximately 2005. <BR> <BR>

The North American Pacific Northwest harbors one of the highest incidences of <italic>C. gattii</italic> infections. In an expansion of molecular epidemiology and population analysis of both MLST and VNTR markers, we show that the VGIIc group is clonal and hypothesize it arose recently. The VGIIa/c outbreak lineages are sexually fertile and studies support ongoing recombination in the global VGII population. This illustrates two hallmarks of emerging outbreaks: high clonality and the emergence of novel genotypes via recombination. In macrophage and murine infections, the novel VGIIc genotype and VGIIa/major isolates from the United States are highly virulent compared to similar non-outbreak VGIIa/major-related isolates. Molecular analysis distinguishes clonal expansion of the VGIIa/major outbreak genotype from related but distinguishable less-virulent genotypes isolated from other geographic regions. Our evidence documents emerging hypervirulent genotypes in the United States that may expand further and provides insight into the possible molecular and geographic origins of the outbreak. <BR> <BR>

While the outbreak is a significant public health concern, an overlooked but considerable disease burden attributable to <italic>C. gattii</italic> among HIV/AIDS patients in Southern California has also occurred (chapter 4). In our studies, we examined the molecular epidemiology, population structure, and virulence attributes of <italic>C. gattii</italic> isolates collected from a cohort of HIV/AIDS patients in Los Angeles County, California. We show that these isolates consist almost exclusively of VGIII molecular type (>93%), in contrast to the vast majority of VGII molecular type isolates found in the outbreak region. Based on molecular phylogenetic analysis, the global VGIII population structure can be divided into two groups, VGIIIa and VGIIIb. We show that isolates from the Californian patients are virulent in murine and macrophage models of infection, with VGIIIa significantly more virulent than VGIIIb. Several VGIII isolates are highly fertile and able to produce large numbers of spores that may serve as infectious propagules. Based on molecular analysis, the a and &alpha; VGIII MAT locus alleles are largely syntenic with limited rearrangements compared to the known VGI (a/&alpha;) and VGII (&alpha;) <italic>MAT</italic> loci, but each has unique characteristics including a distinct deletion flanking the 5' VGIII <italic>MAT</italic> <bold>a</bold> alleles. Fingerprinting analyses of the MAT locus shows that the &#945; allele is more heterogeneous than the <bold>a</bold>allele. Our studies indicate that <italic>C. gattii</italic> VGIII is endemic in Southern California, with other isolates originating from the neighboring regions of Mexico, and in some rarer cases from Oregon and Washington state. Given that >1,000,000 cases of cryptococcal infection and >620,000 attributable mortalities occur annually in the context of the global AIDS pandemic, our findings suggest a significant burden of <italic>C. gattii</italic> infection in AIDS patients may be unrecognized, with potential prognostic and therapeutic implications. These results signify the need to classify pathogenic Cryptococcus cases and highlight possible host differences among the <italic>C. gattii</italic> molecular types, influencing infection of immunocompetent (VGI/VGII) vs. immunocompromised (VGIII/VGIV) hosts. <BR> <BR>

In 2007, the first confirmed case of <italic>Cryptococcus gattii</italic> was reported in the state of North Carolina, USA (chapter 5). An otherwise healthy HIV- male patient presented with a large upper thigh cryptococcoma in February, which was surgically removed and the patient was started on long-term high-dose fluconazole treatment. In May of 2007, the patient presented to the emergency room with seizures. Magnetic resonance imaging revealed two large CNS lesions found to be cryptococcomas based on brain biopsy. Prior chest CT imaging had revealed small lung nodules indicating that <italic>C. gattii</italic> spores or desiccated yeast were likely inhaled into the lungs and dissemination occurred to both the leg and CNS. The patient's travel history included a visit throughout the San Francisco, California region in September-October of 2006, consistent with acquisition during this time period. Cultures from both the leg and brain biopsies were subjected to analysis. Both isolates were <italic>C. gattii</italic>, VGI molecular type. Based on molecular studies and virulence in a heterologous host model, the leg and brain isolates are identical, but the two differed in mating fertility. Two clinical isolates, one from a transplant recipient in San Francisco and the other from Australia, were identical to the North Carolina isolate at all markers tested. Closely related isolates that differ at only one or a few noncoding markers are present in the Australian environment. Our findings support a model in which <italic>C. gattii</italic> VGI was transferred from Australia to California, possibly though an association with its common host plant <italic>E. camaldulensis</italic>, and the patient was exposed in San Francisco and returned to present with disease in North Carolina. <BR> <BR>

To elucidate the speciation dynamics between molecular types VGII and VGIII and what influence nuclear and mitochondrial genomes have on intracellular proliferation and hyoervirulence, we conducted a comprehensive analysis of progeny sets between these molecular types, including progeny sets of VGII<bold>a</bold> x VGIII&alpha; and VGII&alpha; x VGIII<bold>a</bold> crosses (chapter 6). Our analysis reveals that spore viability is exceedingly low, supporting that these are distinct species. We also found that the mitochondrial genome of virulent strains may be necessary but not fully sufficient to confer virulence characteristics. These studies show that each molecular type is likely a distinct species, which was further supported by high levels of diploid or aneuploid progeny, and also shed light into the possible control that both the mitochondrial and nuclear genomes may play in hypervirulence of <italic>C. gattii</italic> outbreak genotypes. Future analyses of both the regions regulating the virulence and also the generation of progeny sets between other species will further address the roles of both speciation and virulence evolution in <italic>C. gattii</italic>. <BR> <BR>

Overall, the studies documented in this dissertation have increased the understanding of molecular epidemiology, population structures, fertility, phenotypic characteristics, virulence characterizations, and speciation of this expanding and emerging fungal pathogen in the United States. This dissertation adds a foundation to the studies of <italic>C. gattii</italic> in the United States and enables future research to be conducted in several critical areas to better understand and ultimately influence surveillance, prognosis, and treatment of patients and animals in future years.