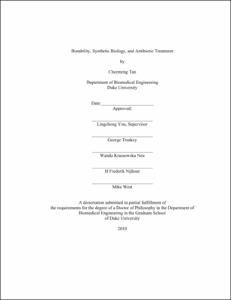 Bistable switches are commonly observed in the regulation of critical processes such as cell cycles and differentiation. The switches possess two fundamental properties: memory and bimodality. Once switched ON, the switches can remember their ON state despite a drastic drop in stimulus levels. Furthermore, at intermediate stimulus levels with cellular noise, the switches can cause a population to exhibit bimodal distribution of cell states. Till date, experimental studies have focused primarily on cellular mechanisms that generate bistable switches and their impact on cellular dynamics.

Here, I study emergent bistability due to bacterial interactions with either synthetic gene circuits or antibiotics. A synthetic gene circuit is often engineered by considering the host cell as an invariable "chassis". Circuit activation, however, may modulate host physiology, which in turn can drastically impact circuit behavior. I illustrate this point by a simple circuit consisting of mutant T7 RNA polymerase (T7 RNAP*) that activates its own expression in bacterium Escherichia coli. Although activation by the T7 RNAP* is noncooperative, the circuit caused bistable gene expression. This counterintuitive observation can be explained by growth retardation caused by circuit activation, which resulted in nonlinear dilution of T7 RNAP* in individual bacteria. Predictions made by models accounting for such effects were verified by further experimental measurements. The results reveal a novel mechanism of generating bistability and underscore the need to account for host physiology modulation when engineering gene circuits.