Analysis and Redesign of Protein-Protein Interactions: A Hotspot-Centric View 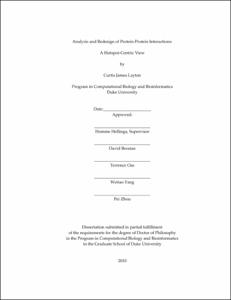 <p>One of the most significant discoveries from mutational analysis of protein interfaces is that often a large percentage of interface residues negligibly perturb the binding energy upon mutation, while residues in a few critical "hotspots" drastically reduce affinity when mutated. The organization of protein interfaces into hotspots has a number of important implications. For example, small interfaces can have high affinity, and when multiple binding partners are generated to the same protein, they are predisposed to binding the same regions and often have the same hotspots. Even small molecules that bind to interfaces and disrupt protein-protein interactions (PPIs) tend to bind at hotspots. This suggests that some hotspot-forming sites on protein surfaces are <italic>intrinsically</italic> more apt to form protein interfaces. These observations paint a hotspot-centric picture of PPI energetics, and present a question of fundamental importance which remains largely unanswered: <italic>why are hotspots hot?</italic>

<p>In order to gain insight into the nature of hotspots I experimentally examined the small, but high-affinity interface between the synthetically evolved ankyrin repeat protein Off7 with E. coli maltose binding protein by characterization of mutant variants and redesigned interfaces. In order to characterize many mutants, I developed two high-throughput assays to measure protein-protein binding that integrate with existing technology for the high-throughput fabrication of genes. The first is an ELISA-based method using in vitro expressed protein for semi-quantitative analysis of affinity. Starting from DNA encoding protein partners, binding data is obtained in just a few hours; no exogenous purification is required. For the second assay, I develop data fitting methods and thermodynamic framework for determination of binding free energies from binding-induced shifts in protein thermal stability monitored with Sypro Orange.

<p>Analysis of Off7/MBP variants using these methods reveals that conservative mutagenesis or local computational repacking is tolerated for many residues in the interface without drastic loss of affinity, except for a single essential hotspot. This hotspot contains a Tyr-His-Asp hydrogen bonding network reminiscent of a common catalytic motif. Substitution of the tyrosine with phenylalanine shows that a single hydrogen bond across the interface is critical for binding. Analysis of the protein database by structural bioinformatics shows that, although rare, this motif is present in other naturally evolved interfaces. Such a triad was found in the homodimeric interface of PH0642 from Pyrococcus horikoshii, and is conserved between many homologues in the nitrilase superfamily, meeting one of the key criteria by which potential hotspots can be identified. This analysis supports a number of analogies between hotspot residues and catalytic residues in enzyme active sites, and raises the intriguing possibility that hotspots may be associated with other structural motifs that could be used for identification or design of PPIs.