Sexual Selection in Mantled Howling Monkeys (Alouatta palliata), With an Emphasis on the Role of Female Mate Choice 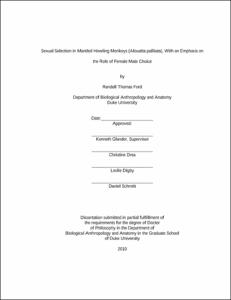 Despite early neglect, recent studies of sexual selection have shown a renewed interest in female reproductive strategies. Clearly the traditional portrayal of female animals as passive participants in mating is incorrect, but much is still unknown about female reproductive strategies, including the extent of female mate choice. The primary goal of this dissertation was to explore the role of female mate choice in mantled howling monkeys (<italic>Alouatta palliata</italic>), a species in which males have previously been assumed to control mating.

From March 2006 through February 2007, I used continuous focal-animal sampling to record the behavior of adult female mantled howlers at Hacienda La Pacifica, Guanacaste, Costa Rica. The focal animals in the study were nine adult females in a social group that has been regularly monitored since 1984. There were also three capture sessions performed by K. Glander to collect blood samples for genetic paternity analysis. A total of 29 individuals in the study group and eight adult males from surrounding groups were captured.

The genetic paternity analyses were largely inconclusive. Of the eight microsatellite markers used previously in this species, only four were polymorphic in this sample. Additionally, nearly half (7 of 16) of the purported mothers were excluded at one locus. Assuming the mother was unknown allowed determination of genetic paternity in only one case. In terms of behavior, females were largely responsible for soliciting copulations, but female mate choice did not appear to be a major factor. Females almost never rejected copulations (3.3% of copulation attempts) and mated with multiple males in 77.8% of female cycles.

The lack of conclusive genetic paternity data leaves open the possibility of post-copulatory female choice. However, explanations exist for the apparent lack of female mate choice in this species. Because males must attain alpha status to remain in a group, differences in inherent quality may be low among group males. The potential for small differences among males in a social group, combined with the fact that females disperse from their natal group, suggests that female mate choice may occur primarily in choosing a group during dispersal.