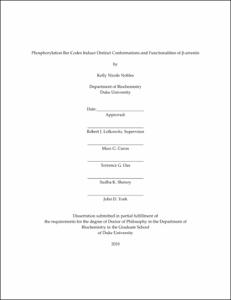 Seven transmembrane spanning receptors (7TMRs), or G-protein coupled receptors (GPCRs), represent the largest and most ubiquitous of the several families of plasma membrane receptors and regulate virtually all known physiological processes in humans. The classical paradigm of signal transduction in response to 7TMR stimulation involves an agonist-induced conformational change of the receptor which leads to interaction with and dissociation of the heterotrimeric G-protein into independent Galpha and Gbeta;gamma signaling subunits. Following their activation, 7TMRs are phosphorylated by G-protein coupled receptor kinases (GRKs) and subsequently recruit beta-arrestins. beta-arrestins are multifunctional adaptor proteins which not only desensitize G-protein signals, but also facilitate receptor internalization and mediate numerous signaling pathways on their own. As beta-arrestins universally interact with members of the 7TMR superfamily, we (1) developed an in vitro model system to assess conformational changes that occur in beta-arrestins in response to phosphorylation and (2) to map the sites of phosphorylation on the beta2 adrenergic receptor by different GRKs which would determine the conformation(s) assumed by beta-arrestin and thereby, in turn, instruct its functional capabilities.

We determined conformational changes in beta-arrestin1 in vitro using limited tryptic proteolysis and MALDI-TOF MS analysis in the presence of a phosphopeptides derived from the C-terminus of the V2 vasopressin receptor (V2Rpp or V2R4p) or the corresponding unphosphorylated peptide (V2Rnp). Upon V2Rpp binding, we show that the previously shielded R393 becomes accessible, which indicates release of the C-terminus. Moreover, we have shown that R285 becomes more accessible and this residue is located in a region of &beta;-arrestin1 responsible for stabilization of its polar core. These two findings demonstrate "activation" of beta-arrestin1. We also show a functional consequence of the release of beta-arrestin1's C-terminus by enhanced clathrin binding. In addition, we have shown marked protection of beta-arrestin1's N-domain in the presence of V2Rpp; consistent with previous studies suggesting the N-domain is responsible for recognizing phosphates in 7TMRs. Using a differentially phsophorylated V2R peptide (V2R4p), we show that beta-arrestin1 is able to adopt distinct conformations in response to different phosphorylation patterns. Futhermore, a striking difference is observed in the conformation of V2Rpp-bound beta-arrestin1 when compared to beta-arrestin2, namely the flexibility of the inter-domain hinge region. These data represent the first direct evidence that the beta-arrestin1 conformation is differentially instructed by phosphorylation patterns and that the "receptor-bound" conformations of beta-arrestins1 and 2 are different.