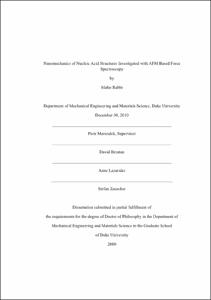 Nucleic acids are subjected to many different mechanical loadings inside. These loadings could cause large deformations and conformational changes to these molecules. This is why the mechanical properties of nucleic acids are so important to their functions. Here we use a newly designed and built high-performance AFM force spectrometer, supplemented with molecular dynamics simulations and NMR spectroscopy to investigate the relationship between mechanical properties and structure of different nucleic acids.

To test the mechanical properties of nucleic acids, we successfully designed and purpose-built a single molecule puller, an instrument to physically stretch single molecules, at a fraction of the cost of a commercial AFM instrument. This instrument has similar force noise to hybrid instruments, while also exhibiting significantly lower drift, on the order of five times lower. This instrument allows the measurement of subtle transitions as a molecule is stretched. With the addition of a lock-in amplifier, we possibly could obtain better force resolution, the order of femtonewtons.

We find that helical structure does indeed have an effect on the mechanical properties of double-stranded DNA. As the A-form double helix has a shorter, wider structure compared to the B-form helix, its force spectra exhibit a shorter initial length before the overstretching force plateau, compared to B-form DNA. Contrarily, the Z-form double helix has a narrower, more extended helical structure than B-form DNA, and we see this fact manifest in the force spectra of Z-DNA, which has a longer initial length before the overstretching force plateau. Also, interestingly, we find that neither A, nor Z-DNA force spectra display the second melting force plateau. Indicating this plateau is not necessarily cause by melting of strands apart, but rather a feature of B-DNA.

To better understand the forces that stabilized these different structures, specifically base stacking, we also mechanically characterize different single-stranded helical polynucleotides using AFM based force spectroscopy. We expand on previous studies by confirming that single helical polynucleotides undergo a force transition at a force of ~20 pN as they are uncoiled, and also demonstrating, that when stretched beyond this force transition, the molecules behave differently depending on base sequence and backbone sugar. Specifically, the force spectra of poly-adenylic acid possess a linear force region, which persists to ~300 pN, after the force plateau. We also observe that poly-deoxyadenylic acid is comparatively stiffer than other polynucleotides after undergoing two force transitions. By supplementing our force spectroscopic data with MD simulations and NMR spectroscopy, we find that base stacking in adenine is quite strong, persisting above 100 pN. We find that initial helical structure, which is defined by base stacking and backbone sugar, guides the stretching pathway of the polynucleotides. This finding can possibly be extrapolated to the elasticity of double-stranded DNA.