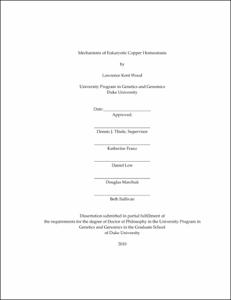 Copper (Cu) is a co-factor that is essential for oxidative phosphorylation, protection from oxidative stress, angiogenesis, signaling, iron acquisition, peptide hormone maturation, and a number of other cellular processes. However, excess copper can lead to membrane damage, protein oxidation, and DNA cleavage. To balance the need for copper with the necessity to prevent accumulation to toxic levels, cells have evolved sophisticated mechanisms to regulate copper acquisition, distribution, and storage. The basic components of these regulatory systems are remarkably conserved in most eukaryotes, and this has allowed the use of a variety of model organisms to further our understanding of how Cu is taken into the cell and utilized.

While the components involved in Cu uptake, distribution, and storage are similar in many eukaryotes, evolution has led to differences in how these processes are regulated. For instance, fungi regulate the components involved in Cu uptake and detoxification primarily at the level of transcription while mammals employ a host of post-translational homeostatic mechanisms. In <italic>Saccharomyces cerevisiae</italic>, transcriptional responses to copper deficiency are mediated by the copper-responsive transcription factor Mac1. Although Mac1 activates the transcription of genes involved in high affinity copper uptake during periods of deficiency, little is known about the mechanisms by which Mac1 senses or responds to reduced copper availability. In the first part of this work, we show that the copper-dependent enzyme Sod1 (Cu,Zn superoxide dismutase) and its intracellular copper chaperone Ccs1 function in the activation of Mac1 in response to an external copper deficiency. Genetic ablation of either <italic>CCS1</italic> or <italic>SOD1</italic> results in a severe defect in the ability of yeast cells to activate the transcription of Mac1 target genes. The catalytic activity of Sod1 is essential for Mac1 activation and promotes a regulated increase in binding of Mac1 to copper response elements in the promoter regions of genomic Mac1 target genes. Although there is precedent for additional roles of Sod1 beyond protection of the cell from oxygen radicals, the involvement of this protein in copper-responsive transcriptional regulation has not previously been observed.

Higher eukaryotes including mice and humans regulate Cu uptake predominately by means of post-translational control of the localization and stability of the Cu transport proteins. One of these proteins, Ctr1, is the primary means of Cu uptake into the cell, and members of the highly conserved Ctr family of Cu ion channels have been shown to mediate high affinity Cu(I) uptake into cells. In yeast and cultured human cells, Ctr1 functions as a homo-trimer with each monomer harboring an amino-terminal extracellular domain, three membrane spanning domains, a cytoplasmic loop, and a cytoplasmic tail. In addition to the highly conserved Ctr1 Cu ion importer, the baker's yeast <italic>S. cerevisiae</italic> expresses a related protein called Ctr2. Experimental evidence demonstrates that unlike yeast and mammalian Ctr1, yeast Ctr2 is localized to the vacuolar membrane where it mobilizes Cu stores to the cytoplasm under conditions of Cu limitation.

In mice and humans a gene encoding a protein with significant similarity to the <italic>Ctr</italic> family has been identified, denoted <italic>Ctr2</italic>. Publications from others suggest that mammalian Ctr2 may either be a low affinity Cu importer at the plasma membrane or, similar to yeast Ctr2, may mobilize Cu from intracellular organelles such as the lysosome to the cytosol. In agreement with a previous report we found that a fraction of mouse Ctr2 is localized to the plasma membrane and that its membrane topology is the same as Ctr1. Interestingly, over-expression of Ctr2 by stable transfection results in decreased intracellular bioavailable Cu. To begin to understand the physiological role of Ctr2, mice bearing a systemic deletion of the <italic>Ctr2</italic> gene were generated. The <italic>Ctr2-/-</italic> mice are viable but hyper-accumulate Cu in all tissues analyzed. Moreover, protein levels of the Ctr1 Cu importer are dramatically altered in tissues from the <italic>Ctr2</italic> knock out mice, and over-expression of Ctr2 in cultured mammalian cells enhances processing of the Ctr1 protein into a less active form. Taken together these results suggest that mammalian Ctr2 functions in the cell as a negative regulator of Cu import via Ctr1.