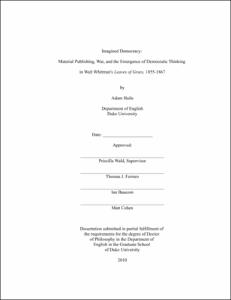 This dissertation traces the evolution of Whitman's democratic thinking across the first four editions of Leaves of Grass, covering the auspicious years 1855, 1856, 1860 and 1867. While democracy is the master political term within Whitman's later editions, it was nearly devoid from the original one, in which republican political concepts were still regnant. The argument put forth is that in the space of twelve years, Whitman's relationship to democracy went through a strikingly classic dialectic trajectory: emergence, consolidation and fissure. The immediate engine driving this progression was the Civil War, but behind this immediate cause was the slower, broader motor of modernization, particularly modernization's expansion of markets, for in the market's circulation and interconnection of people and commodities Whitman saw a model for an expansive and integrative democratic collectivity. The first chapter explores the importance to Whitman of the physical print room as a uniquely hybrid site in the course of modernization, for while it was one of the first to exploit the expanding industrial market, it also maintained pre-industrial forms of artisanal labor late into that progression. The print room thus became a site where the industrial market's reach and pre-industrial labor's affective relationship to the product and its consumers could be combined, and the print room therefore plays a central role, in ways both subtle and profound, in Whitman's poetry, in his understanding of the emerging democratic nation, and in his own literary productive practice. The second chapter turns from an investigation of democratic social space to an investigation of democratic time, noting how a nearly forgotten event, a loan between Whitman and James Parton, ended the "afflatus" under which the early editions were produced and prompted Whitman to revamp Leaves' relationship to history. Whitman's experience of personal debt failure led him to reconsider the ways in which his political project was susceptible to similar collapse, for the circuits of affective connection upon which his democratic project was based depended not only on their reach through space but on their forward projection through time, particularly the continual recycling of death into life, what Whitman called the "perpetual payment of the perpetual loan." Whitman sought to reduce this contingency by abstracting the political project of the work from his immediate social world (America) to a political philosophy (democracy) which stood above and outside of time. The 1860 edition thus marked the emergence of democracy as the book's central political philosophy. Yet this strategy proved insufficient when Whitman confronted the one barrier to affective exchange that his verse could not bridge: the dead bodies of the Union soldiers. This unbridgeable difference reverberated outward through the circuits of Whitman's poetry, dismantling the political and affective structures he had been building up to 1860. A text which previously declared the absence of both the past and death - "the greatest poet ... places himself where the future becomes present," "the smallest sprout shows there is really no death" - now becomes doubly haunted by ghosts, once by the dead bodies of Union soldiers which, as much as Whitman declares he "will henceforth forget," he cannot, and again by the strange emergence of new "Phantoms, gigantic, superb." These phantoms represent for Whitman the inversion of democracy's promise, democracy become nightmarish and zombie-like, and his fundamental triangle is haunted by its inverse: a melancholic Whitman; the overmastering re-emergence of the "bards of the past" and explicitly antiquated poetic forms; and a threatening, sovereign federal power autonomous from the people. The revisions Whitman introduced to the post-war edition of 1867 tell the story of a crisis in democratic confidence on behalf of democracy's former champion. Taken all together, the first four editions of Leaves form a chronicle of the archetypal democratic poet's struggle with democracy during U.S. democracy's most critical decade.