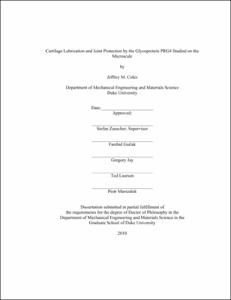 Human joints are able to withstand millions of loading cycles with loads regularly more than 3 times an individual's body weight in large part due to the unique bearing properties of articular cartilage, a strong, slippery tissue that covers the ends of long bones. PRG4 is a boundary lubricating glycoprotein present on the cartilage surface and in the synovial fluid surrounding it. While evidence that PRG4 lubricates and preserves normal joint function is strong, little is known of its effect on cartilage surface properties, the mechanism by which it lubricates, or its postulated role of preventing wear on joints. The effect of PRG4 on cartilage friction, wear, structure, morphology, and the mechanisms by which it mediates these factors are studied here. Methods to study these parameters at the microscale using atomic force microscopy are also developed.

Cartilage of mice with the Prg4 gene (which expresses PRG4) deleted is shown to be different in a number of ways from wild type cartilage. The uppermost layer is thicker and less uniform and the surface is rougher and softer. There is also a loss of proteoglycans, structural components of cartilage, from the underlying superficial tissue, and apparent tissue damage in some cases. Wear in the presence of PRG4 in shown to be significantly lower than in its absence, a finding which may have direct implications for prevention and treatment of osteoarthritis. It appears that PRG4 needs to be present in solution, not merely on the cartilage surface to have this effect, indicating that adsorption properties are important for wear prevention.