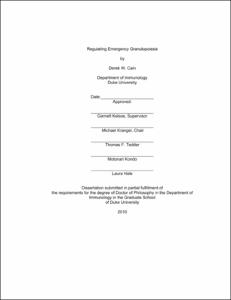 Normally, neutrophil pools are maintained by "steady-state" granulopoiesis. Infections and inflammation, however, trigger neutrophilias that are supported by a hematopoietic program of accelerated granulopoiesis known as "emergency" granulopoiesis. Steady-state and emergency granulopoiesis are thought to depend on distinct members of the CCAAT enhancer binding protein (C/EBP) family of transcription factors, yet the extracellular cues that determine these developmental pathways are unclear. I hypothesize that inflammation elicits IL-1 which acts directly on hematopoietic progenitor cells for the induction of emergency granulopoiesis. Indeed, IL-1RI<super>-/-</super> mice fail to mount reactive neutrophilias in response to adjuvant-induced inflammation. Analysis of this specific impairment revealed an unanticipated role for IL-1RI in supporting increased proliferation by granulocyte/macrophage progenitors (GMP) and, surprisingly, more primitive multipotent progenitors (MPP) and hematopoietic stem cells (HSC). Whereas IL-1 drives HSC proliferation directly <italic>in vitro</italic>, inflammation induces comparable rates of proliferation in IL-1RI deficient and -sufficient HSC, MPP, and GMP in mixed chimeric mice. Thus, IL-1RI signals play a necessary, but indirect role in the support of alum-induced neutrophilias by expanding both pluripotent and myeloid progenitor compartments to accelerate granulopoiesis.

The lack of alum-induced neutrophilia in IL-1RI<super>-/-</super> mice is due to defective mobilization of bone marrow (BM) neutrophils and impaired proliferation of hematopoietic stem and progenitor cells (HSPC). Coincident defects in neutrophil mobilization and HSPC proliferation suggest that the trigger for emergency granulopoiesis might be the exhaustion of neutrophil compartments rather than inflammatory inductions of growth factors. Consistent with this hypothesis, non-inflammatory reductions in BM neutrophil numbers elicit granulopoietic responses similar to those induced by adjuvant. Alum mobilizes BM neutrophils via G-CSF, but increased HSPC proliferation results from a density-dependent mechanism that is only partially dependent on G-CSF. Notably, C/EBP&beta;, thought to be necessary for enhanced generative capacity of BM, is dispensable for increased proliferation of HSPC, but plays a role in the terminal differentiation of neutrophils. These observations indicate that the draining of BM neutrophil pools is sufficient to activate a latent, homeostatic mechanism of accelerated granulopoiesis. I propose a common model for the regulation of neutrophil production that explains both steady-state and emergency granulopoiesis through negative feedback.